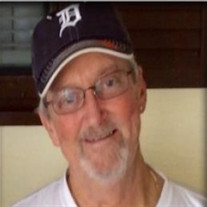 Willard E. Gregory (Willy), 64, of Marion, Ohio, went to be with the Lord on Friday, June 17, 2016 while surrounded by his family and pastor. Willy was born July 21, 1951, the youngest son of Willard and Margaret (Keyser) Gregory who preceded him in death in 1992 and 1993. He is survived by his loving wife of 44 1/2 years, Mary (Adams) Gregory, their two children, Troy Gregory (wife, Melanie) of Lewis Center, Ohio, and Angie (Gregory) Thompson (husband, William) of Marion, Ohio, eight grandchildren, his brother, John Gregory (wife, Arleen) of Luray, Virginia, as well as several sister and brother-in-laws, nieces, nephews, cousins and an uncle. He was a 1969 graduate of Portsmouth East HS, earning a Bachelors Degree from Ohio University in 1978. He was Manager of Newberry's Pro Am Shop in Portsmouth, Ohio in the early 1970s, and began a lifelong career with GTE (Verizon) in 1977, retiring in 2003. He held several positions including Supervisor and District Manager. He served on many boards and committees including United Way, and a member of the Bryan, Ohio Lions Club during his career. He was an avid golfer and won many awards for his golfing skills. He loved all sports and enjoyed attending sporting events, especially attending Muirfield Golf Tournaments, Cincinnati Reds Baseball and Bengal Football games. He was a family man at heart and enjoyed coaching his children in soccer, attending their activities, and vacationing. He was a member of Richland Road Church of Christ. A Memorial service will be held on Friday, June 24, 2016 at 1:00pm in Richland Road Church of Christ, 535 Richland Rd., Marion, Ohio with Russell Howard officiating. Visitation will be before the service at the church from 11:00am-1:00pm. Memorial contributions may be made to Disabled American Veterans PO Box 14301 Cincinnati, OH 45250-0301 and expressions of sympathy can be left at www.cremationservicesofohio.com. Affordable cremation services is assisting the family with the arrangements.

Willard E. Gregory (Willy), 64, of Marion, Ohio, went to be with the Lord on Friday, June 17, 2016 while surrounded by his family and pastor. Willy was born July 21, 1951, the youngest son of Willard and Margaret (Keyser) Gregory who preceded... View Obituary & Service Information

The family of Willard E "Willy" Gregory created this Life Tributes page to make it easy to share your memories.

Send flowers to the Gregory family.