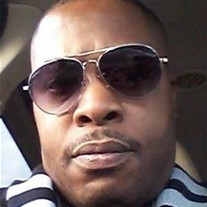 Timothy Morris Teague, 44 of Columbus and formerly of Marion passed away on Sunday March 12, 2017 at Mt. Carmel East Hospital in Columbus Ohio. Timothy was born April 10, 1972 in Wilkes-Barre PA. He was married June 13, 2015 to Kimberly (Rosvanis) Teague who survives. In addition to his wife, he is survived by mother and step father Sharon Kay (Pickens) Thomas and James Thomas (Professionally known as Tangee and Tommie); children Ajah, Courtney, Kayla, Lexas, Timothy II, Isaiah, Crossificio, and their mother, Donna Cocherl-Brady. Lake, Brice, and their mother, Kristen Roasa grandchildren; brothers Michael Pickens, James and Tyson Teague all of Marion; nieces and nephews Tyson, Tycionna, John, Soni, Jerrell, Marcus, Latifah, and Vanessa; aunt Sandra West; as well as a host of other extended family. Timothy was preceded in death by his grandfather Morris Dozier and maternal grandmother Violet Pickens as well as his biological grandfather Willie Pickens. Timothy was a musician and entertainer traveling and living in many parts of the country. He last worked as Office Coordinator for an ambulance company. He was a graduate of Orlando High School in Orlando, Florida in 1990 and the Columbus State Community College. Timothy always thought of Marion as his home. Funeral Services will be held on Thursday, March 23, 2017 at 12:00 noon in the Mayes Community Temple, 801 Bennett St., Marion with Elder Shawn Jackson officiating, burial will follow in Grand Prairie Cemetery. The family will receive friends at the church on Thursday from 10:00 am until the time of service. The family extends and invitation to the Repass for immediate family and close friends to join them for a time of fellowship and sharing memories at the Recovery Community Center, 827 North Main Street, Marion, Ohio. The family would like to thank Arnita Pittam for hosting the luncheon. The family suggests memorials be made through Affordable Cremation Services of Ohio,1701 Marion Williamsport Rd. who is assisting the family with arrangements.

Timothy Morris Teague, 44 of Columbus and formerly of Marion passed away on Sunday March 12, 2017 at Mt. Carmel East Hospital in Columbus Ohio. Timothy was born April 10, 1972 in Wilkes-Barre PA. He was married June 13, 2015 to Kimberly (Rosvanis)... View Obituary & Service Information

The family of Timothy Morris Teague created this Life Tributes page to make it easy to share your memories.

Timothy Morris Teague, 44 of Columbus and formerly of Marion...

Send flowers to the Teague family.