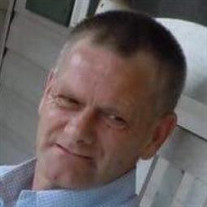 Thomas Edward McIntire age 54, passed away unexpectedly on Jan 1, 2017 at Marion General Hospital. Thomas was born in Marion, Ohio on January 17, 1962 to the late Herbert and Ada (Smith) McIntire. In addition to his parents he was preceded in death by brother in law James Arnett and nephew, Bradley. Tommy was a Son, Father, Grandpa, Brother, Uncle, Nephew, Cousin and a Friend, but no matter what you called him; he was always there with a "Heart of Gold". Tommy loved spending time with his family but most of all his grandchildren were his pride and joy and he loved them unconditionally. Some would say he was "one of a kind" but he was our "one of a kind" and was loved very much. He will be dearly missed. He is survived by two daughters; Jennifer (Josh) Keen, Shanna (Scott Baker) McIntire, a son Thomas( Amber Brown) McIntire Jr., two sisters, Linda Arnett, Shirley (Bill) Harper, three brothers, Gary (Tammy) McIntire, James (Kay) McIntire, Michael (Tamara) McIntire, all of Marion, Ohio., four grandchildren; Hannah Keen, Carley Keen, Carter Baker, Ray'Lynn Baker. two step-grandchildren Torianna Brown, Kennedy Brown. Numerous nieces, nephews, aunts, uncles, and cousins. Also, ex-wife and long time friend Lanette Augenstein and his always mother in law Pat Augenstein. Friends may call at Liberty Baptist Church on Woodrow Ave, Marion, Ohio, on Friday, January 6, 2017 from 11:00 am - 1:00 pm, with funeral service following at 1:00 pm, Pastor Chris Braye will conduct the funeral services, with burial to follow in Pleasant Hill Cemetery. Traditional Funeral Services are being provided by Affordable Cremation Services of Ohio in conjunction with Pirnstill Funeral Service, 1701 Marion Williamsport Rd., and expressions of sympathy can be left at www.cremationservicesofohio.com..The family suggests memorial donations be made through the funeral home to assist with expenses

Thomas Edward McIntire age 54, passed away unexpectedly on Jan 1, 2017 at Marion General Hospital. Thomas was born in Marion, Ohio on January 17, 1962 to the late Herbert and Ada (Smith) McIntire. In addition to his parents he was preceded in... View Obituary & Service Information

The family of Thomas Edward McIntire created this Life Tributes page to make it easy to share your memories.

Send flowers to the McIntire family.