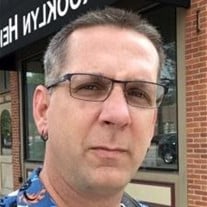 The world grew dimmer and smaller January 22nd, when Thomas Dunn passed unexpectedly in his home in Delaware Ohio. Sadly, Tom's journey in this world ended and he went on to be with God. Thomas was given life August 15th, 1972 in Marion, Ohio. He is survived, loved, and missed by his beautiful daughter Echo Dunn, (Delaware), his adorable son Oliver Moats (Delaware), his mother Julia Newland (Terry) (Delaware), his father Mike Dunn (Marion), his brother Tony Dunn (Medina), his brother Bryan Dunn (Marion), and his loving fiancé Nichole Moats (Delaware). Thomas attended school at Marion River Valley graduating in 1990. He graduated from the University of Akron in 1993. Thomas excelled academically throughout his years of school. He played the violin and saxophone. Tom was active in school musicals. He ran track and cross country making the accomplishment of going to state in both despite a collapsed lung. Tom was the number one honors student going into the University of Akron. He graduated in three years with honors and a double major and minor. Thomas's writing and stories were and are beautiful works of art. Computers came easily to Tom. He quickly made his living writing software and editing books. In 2001, his daughter Echo was born. In 2013, his son Oliver was born. Tom was a devoted father. His greatest joys were his children. They were his life. He was the proudest father there could be. Tom loved taking Echo, Oliver, and Nichole on trips and doing activities with them. He carved out time for his children no matter how busy he was. Tom spent years working at Workflow Data Systems and most recently doing editing for Pearson Publishing. Thomas had a huge heart. He often helped others in AA and those struggling. He put on a gruff exterior, but inside he was one that felt much pain for others and himself. Tom made friends everywhere. He was a bigger than life personality that cannot be forgotten in the hearts of all who love him. His family is grieving and in shock. To accommodate the hundreds and hundreds of lives he touched, we have the following services planned: * A private funeral for immediate family on the 13th of February. * A celebration of his life on February 17th- 2:00 pm, at St Peters Episcopal Church @ 45 W Winter St, Delaware Ohio. We want everyone to come to his celebration and share memories of Thomas and remember him for his children, family, and fiancé. We were given Thomas for 45 short years. Not nearly long enough. He is so missed and so loved. Our hearts are shattered and we will never be the same. May God grant him peace. Donations maybe made to St Peter's Episcopal Church or Andrews House In Delaware, Ohio. "Do not go gentle into that good night. Old age should burn and rave at close of day. Rage, rage against the dying of the night." Dylan Thomas

The world grew dimmer and smaller January 22nd, when Thomas Dunn passed unexpectedly in his home in Delaware Ohio. Sadly, Tom's journey in this world ended and he went on to be with God. Thomas was given life August 15th, 1972 in Marion, Ohio.... View Obituary & Service Information

The family of Thomas Dunn created this Life Tributes page to make it easy to share your memories.

Send flowers to the Dunn family.