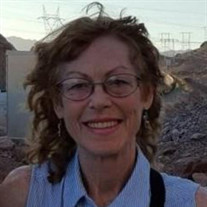 Suzanne Parham, 69, known to her family as Suzy, lost her long fight with illness on Saturday, January 30th, 2021 in Marion, Ohio, with her family by her side. Suzy was preceded in death by her father, Jerry W. Henry and mother Shirley Duncklee Lieberman. She is survived by her children: Jeremye Tunnicliff, Jessica Deyarmond (Anthony Deyarmond), and Benjamin Parham (Miriam Talamini), as well as her brothers: Richard Henry (Cindy Henry) of Shalimar, Florida, David Lieberman (Jeanette Burgos), of Hudson, Florida, Lee Hascup of Brooklyn, New York and sister, Dana White of Massachusetts. Suzy is also survived by her grandsons: Joshua Caron and Jordan Tunnicliff and great grandson Anthony Caron, great grand-daughter, Madilynn Caron, a slew of nieces, nephews and of course, her three much-loved furbabies: Weasley, Mary, and Ellie. Born in Panama City, Florida in 1951, Suzy grew up in many different areas of the United States, including Bronx NY, Tennessee, Florida and Georgia. She married Ralph Parham in LaFayette, Georgia in 1969, eventually divorcing in the mid-70s while Ralph was stationed by the Navy in Brunswick, Maine. She spent the next 20 years living in the Brunswick area, raising her children. She lived on Orr's Island for a period of time, and cherished the time she spent there. She spent a few years in Olean, New York as well as Okeechobee, Florida, Delaware, Ohio, finally settling her last years in Marion, Ohio. She worked hard to provide for her family in many ways. She was a daycare teacher, a home health aide, nurse and worked in a number of animal shelters. Before retiring, she worked at her daughter and son in law's store, Curiosity, and worked part-time at a local drive thru. She enjoyed spending time with her kids and friends. She was considered a free spirit who loved doing and learning things. She worked on lobster traps, raised “critters”: cats, hamsters, bunnies, the occasional snake and turtle. A bit of a homebody, she was certainly a nester who liked to experiment in cooking and enjoying her plants and hobbies. She had so many going at a single time; paints laid about, veggies on the table, pots and gardening tools about the yard. As much as she liked being at home, she did like seeing the sites: Boston, Columbus, and one of her all-time favorites: Las Vegas. She knew how to be entertained. Her favorite things always included family. She loved nothing more than spending time with her family, laughing, eating and enjoying each other. Her family will miss her, but are happy she’s no longer burdened down with pain and suffering. There will be no funeral. We will be holding a tribute for her this coming summer. As she always loved animals, the family asks instead of memorials, please make a donation in Suzy’s name to your local animal shelter.

Suzanne Parham, 69, known to her family as Suzy, lost her long fight with illness on Saturday, January 30th, 2021 in Marion, Ohio, with her family by her side. Suzy was preceded in death by her father, Jerry W. Henry and mother Shirley Duncklee... View Obituary & Service Information

The family of Suzanne C Parham created this Life Tributes page to make it easy to share your memories.

Suzanne Parham, 69, known to her family as Suzy, lost her long...

Send flowers to the Parham family.