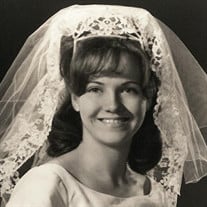 Sally Ann McHugh passed away peacefully in her sleep from natural causes at 5:10 a.m. on Saturday, March 16th. Sally was born on September 21, 1948 to Roger and Ruth Aiken in Albany, NY where she lived throughout her teenage years with her dog Scamper. When she was only 15 years old, she captured the heart of a boy named Robert who would later become her husband when they married in March 1967. They honeymooned on Cape Cod in Massachusetts, and she would fondly tell everyone how even though it snowed it could never keep her away from her beloved ocean. They lived together in Albany until moving to Westerville, OH in 1972 and then Marion, OH in 2007. Sally is survived by her loving husband Robert of nearly 52 years. She is also survived by her three daughters: Sheila Faryman of South Weymouth, MA; Seana McCleery of Cassapolis, MI; and Jessica McHugh of Cape Cod, MA with her son-in-law Timothy who was much too loved to be reduced to a parenthetical. Grandma Sally will be fondly remembered by her five grandchildren whom she loved dearly - Joseph, Michael, Alicia, Danielle, and Jacob - as well as numerous grandpuppies and grandkitties. Sally was a voracious reader and never far away from a tale taking place in a faraway land. When they were young, she encouraged her daughters to fall in love with reading too and would often be found taking them to the library or the bookstore where they could buy as many books as they wanted. Sally instilled within her daughters a deep adoration for all animals, especially dogs and cats, and she was very quick to take in every lost stray that came their way. (Her daughters would also note their mom was very quick to grab the last piece of cake, but they loved her sweet tooth very much.) She loved to garden, and could make anything grow inside or outside. And no matter the weather, she always filled her bird feeders and didn't even mind the squirrels who stole the bird food every day. She could make the best beach plum jelly, spaghetti, and meatloaf (not together, of course), and often encouraged the enjoyment of chocolate chip cookie dough batter. And she always, always inspired her daughters to dream. Perhaps other than her love for her husband and her daughters, nothing could match Sally's love of the ocean. In particular her love of Cape Cod where she played every summer as a child, honeymooned as a young bride, and brought her own daughters to each year. Every day she was on the Cape, Sally would sit by the ocean, watch the seagulls, and be completely content just looking toward the horizon. And every night, Sally would go down to the ocean to say good night to it. Now Sally can visit the ocean whenever she wishes, any day and any night. And she will always be there in our dreams. Her family would like to thank the wonderful staff from Community Care and Kindred Hospice in Marion, OH who cared so compassionately for Sally in her final year. In lieu of flowers, the family requests donations be made to your local animal shelter in Sally's name. To extend a condolence or share a memory visit www.cremationservicesofohio.com Affordable Cremation Services of Ohio has been entrusted with the arrangements.

Sally Ann McHugh passed away peacefully in her sleep from natural causes at 5:10 a.m. on Saturday, March 16th. Sally was born on September 21, 1948 to Roger and Ruth Aiken in Albany, NY where she lived throughout her teenage years with her... View Obituary & Service Information

The family of Sally A. McHugh created this Life Tributes page to make it easy to share your memories.

Sally Ann McHugh passed away peacefully in her sleep from natural...

Send flowers to the McHugh family.