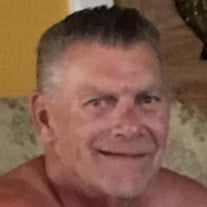 Russell G. Newell age 72 of Marion, died at his residence on June 30, 2021. He was born in Marion on Nov. 3, 1948 to the late Donald and Helen (Sewell) Newell. He married Regenia Baer on May 29, 1970, she survives in Marion, along with a daughter Dee (Heath) Jackson, Prospect, grandchildren Roxanne Miracle, Tyler Jackson, Olivia Jones and Wesley Jackson, great grandchildren Gabriel Miracle, Elli Grace Miracle, Kaleb Miracle and Adalena Jones, brothers Benjamin, Raymond, Samuel and Ronnie Newell, sisters Maxine Berkshire, Cindy Boyd, Dona Reynolds, Mitzi Coate and Sylvia Austin. He is preceded in death by a brother Donald Newell Jr. and a sister Connie Smith. He was a veteran of the United States Army. Mr. Newell was a braided hose operator at BF Goodrich and later at Parker Hannifin, he made padlocks for Wilson and Bohannan. He enjoyed racing and working on cars, fishing, camping and hunting, collecting clocks and antique phone, spending time with his family, loved his grandbabies and his cats and dogs. Affordable Cremation Services of Ohio has been entrusted with the arrangements.

The family of Russell G. Newell created this Life Tributes page to make it easy to share your memories.

Russell G. Newell age 72 of Marion, died at his residence on...

Send flowers to the Newell family.