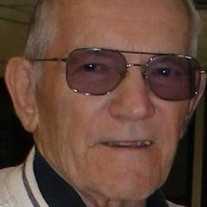 Ronald Glenn “Jack” Millisor was in his home, with his loving daughter Diane, when he went to live with the Lord on the afternoon of August 3, 2019 at the age of 87 years young. Jack was an extremely devoted father, grandfather and friend. Jack was born in LaRue, Ohio to Willis George Millisor and Ethel Willa Fields Millisor on November 6, 1931. He was raised in a house on Chestnut Street with 10 brothers and 1 sister. His older brother gave him the nickname “Jack” when he was a baby because he put him on a bed and he started jumping like a jumping jack. In his youth he enjoyed watching his older brothers practicing football plays with the Oorang Indians, including Jim Thorpe. A graduate of LaRue High School in 1949, Jack was interested in many activities including, the glee club, the drama club, yearbook staff, band, the football team and basketball team where he was high point scorer within a three county area his senior year. He joined the Air Force in 1955 and, after basic training, he was sent to Korea where he began his military career as a company clerk/radio operator before he was asked to play basketball with the traveling Air Force team. Receiving an honorable discharge in July of 1959 Jack went on to work at Whirlpool Marion first starting as a janitor, then becoming head of payroll before his retirement in 1986. Social organizations were important to Jack and he was involved in many. It did not matter where he went, he always saw a friend he knew. His member status included; Elks, Moose, Eagles and he was voted Lion of the year for 1979-80 from the Marion Evening Lions Club. Helping the Marion community did not stop there. Jack was also involved with Whirlpool Marion United Way and co-chaired the Marion Popcorn Festival in 1982. Jack also refereed high school basketball games in his spare time and loved watching the Elgin Comets 1979-1982 football and basketball teams. Jack had many hobbies during his life. Sports was a large part including visiting the major league ball parks to watch the games. Jack was also a die-hard Ohio State Buckeye fan through and through. He loved to attend the Little Brown Jug Sulky races in Delaware, Ohio each year and was once a part owner in a sulky horse. For many years he played golf for enjoyment. He was also blessed to be able to travel with many friends and family. In later years Jack enjoyed southern gospel music and videos, especially the Gaithers. Watching the birds and squirrel feeders from his bedroom window and noting the variety of birds helped to fill some of his last days. Jack is survived by three daughters; Diane Sue Millisor Martin, Lori Ann Millisor Shoemaker and Kimmie Lynn Creque. He will be greatly missed by his three loving grandchildren BethAnne Martin, Sam (Corey) Martin and Zachary Shoemaker. He will also be missed by a host of in-laws, nieces, nephews, cousins and friends. Ronald was the last person from his large family and was preceded in death by his mother Willa Fields Millisor and father Willis Millisor, sister Elizabeth “Betty” Millisor Anshutz, and brothers Robert, Darrel, Irven, John, Willis Jr, Norman, Ralph, Richard, Donald, and Russel. The family would like to extend our deepest gratitude for the loving care from the nurses, aides, volunteers, and the staff who worked in front or behind the scenes at Ohio Health Hospice in Marion, Ohio to help with our loved one’s end of life palliative care. His Air Force veteran’s committal ceremony will be held at Ohio Western Reserve Cemetery at a later date. Memorial donations may be made directly to Affordable Cremation Services of Ohio to help with any fees incurred or you may donate at https://www.gofundme.com/f/utw9cd-help-with-cremation-expenses-for-my-dad&rcid=r01-156527641176-d78de4b2761f438e&pc=ot_co_campmgmt_w Please enjoy and add to the memories, photos, and videos on Jack’s Life Tributes page. To extend a condolence or share a memory visit www.cremationservicesofohio.com Affordable Cremation Services of Ohio has been entrusted with the arrangements.

Ronald Glenn &#8220;Jack&#8221; Millisor was in his home, with his loving daughter Diane, when he went to live with the Lord on the afternoon of August 3, 2019 at the age of 87 years young. Jack was an extremely devoted father, grandfather and... View Obituary & Service Information

The family of Ronald "Jack" G. Millisor created this Life Tributes page to make it easy to share your memories.

Ronald Glenn “Jack” Millisor was in his home, with his loving...

Send flowers to the Millisor family.