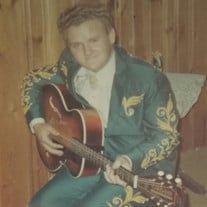 Ronald E Blevins age 68 of Galion, died at Riverside Methodist Hospital, Columbus on Mon. Sept. 2, 2019. He was born on Oct. 15, 1950 in Marion, OH to the late Curtis and Thelma (Rosebrough) Blevins. On Oct. 22, 1977 he married Elizabeth “Liz” Layne, she survives in Galion. Surviving is a daughter Crystal (Treble) Leisure, Bucyrus, sons Jason (Abbi Grau) Blevins, Justin (Jackie Brady) Blevins, both of Galion, grandchildren Gunner Leisure, Kele Blevins, Khol Blevins, Norah Blevins, Anna Queen, Gage Blevins and Liam Blevins, sisters Sheba (Don) Keyser, Debbie (Larry) Gast, brother Bob (Jackie) Blevins and many nieces and nephews. He is preceded in death by a brother John Blevins. In his earlier years Mr. Blevins drove truck, he was a construction worker with his wife as they remodeled homes. Music was his life, he played the bass, steel guitar, piano, played with bands on the road and had a heavenly voice. He enjoyed hunting, fishing and spending time with family. A Celebration of Life will be held on Thursday, September 12, 2019 in the First Lutheran Church, 127 South Columbus Street, Galion, Ohio 44833 from 4:00 - 6:00 pm. Those wishing to send flowers and/or memorial gifts may have them sent to the church. Memorial contributions may be made to the American Diabetes Association. To extend a condolence or share a memory visit www.cremationservicesofohio.com. Affordable Cremation Services has been entrusted with the arrangements.

The family of Ronald E Blevins created this Life Tributes page to make it easy to share your memories.

Send flowers to the Blevins family.