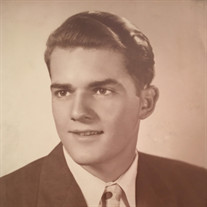 Rodney Dice age 84 of Marion went home to our Lord on Monday, August 12th, 2019 at approximately 4:30pm. Rodney had been admitted to the Marion General Hospital on Thursday, August 1st, 2019 and transferred to Primrose Retirement Community Tuesday, August 6th where he received care from Heartland Hospice of Marion until his passing. He was born in Caledonia on July 11th, 1935 to the late Albert Waldo and Bertha Ellen (Kightlinger) Dice. He graduated from Caledonia High School in the class of 1953. Rodney married his sweetheart, Carrie Ellen Walker, on May 16, 1955. Rodney and Carrie raised their family of five in Marion. Rodney’s typing class paid off and he landed a job clerking for the CSX Railroad. He was a dispatcher when he retired after 41 years of service. Over the years, he enjoyed fishing, CB radios, photography, car shows, motorcycle racing, gospel sings, county fairs and those powered waffles. He was a definite gadget and gizmo guy who was always on the go. Rodney attended the Church of Christ in Christian Union, Marion with his wife Carrie. Rodney is survived by his devoted wife of 64 years, Carrie Dice of Marion and his five children; Michael Dice of Columbus, Kenneth (Jayna) Dice of Marion, Beverly Burkett of North Carolina, Nancy (Bob) Gracely of Marion and Glen Dice of Marion; 10 grandchildren; 15 great-grandchildren; 2 great-great-grandchildren with a third on the way; and a younger brother, James Dice of Marion. In addition to his parents, Rodney is preceded in death by his older brother Lowell Dice of Florida. A private graveside committal ceremony by Pastor Wesley Craker will be held for immediate family at the Marion Cemetery. The family would like to express their deep appreciation to Marion General Hospital, Primrose and Heartland Hospice of Marion for their exceptional kindness and care, also a heartfelt thank you to Rodney’s “extended family” at Fresenius Dialysis Center in Marion who lovingly supported and cared for their father since 2015. Memorial contributions may be made to Church of Christ in Christian Union located at 1709 Bellefontaine Avenue in Marion, Ohio 43302. Affordable Cremations in Marion is assisting the family. Condolences may be expressed to the family by visiting www.cremationservicesofohio.com.

The family of Rodney P. Dice created this Life Tributes page to make it easy to share your memories.

Rodney Dice age 84 of Marion went home to our Lord on Monday,...

Send flowers to the Dice family.