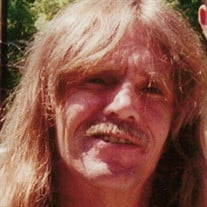 Richard Allen Russell, age 64 gained his angel wings Wednesday, February 27, 2019 at 9:07 a.m. in Marion General Hospital surrounded by his loved ones. Rick was born on March 23, 1954 to Chester “Cheap Chef” Russell and Donna “Whitey's Best Pie Maker” (Feeney) Russell. Rick was a devoted father and the best PaPa in the whole wide world. His family meant everything to him and he will be greatly missed. He graduated from Fremont Ross High School in 1972. Married to Barbara Miles August 30, 1975-1982. They had two wonderful children Gina Lynn (Russell) Mann, Anthony Allen Russell and 6 beautiful grandchildren. Rick had many hobbies that he was proud of, including gardening, landscaping, collecting stamps, coin, records, dvd's, knick-knacks, wind chimes and anything else he could get a bargain on. He loved garage sales whether he was going to one or having one at his home or local flea market. He also enjoyed talking to everyone he met. The man always had a story to tell and a heart of gold. His favorite saying was “if you put a “P” in front of my name, that's the best part of me. Now do you want to mess with me?” He always said that to everyone that he met and did not care what people thought of him, besides the ones he loved. You either loved him or hated him, there was no in between with the man. He lived life how he wanted to and was not afraid to tell you to read between the lines. Rick also enjoyed the great pleasure of life; he called them the four P's and would name them off to you. The “P” was pop and his pop of choice was Mountain Dew. The second “P” was pinball and Rick owned two machines “silver ball mania 1980” and “Harlem Globetrotters on tour 1979.” The third and fourth “P” you have to figure out, but if you knew Rick he would tell you all four “P's” every time he met someone new. He also had one whole bedroom dedicated and filled with exotic plants and animals. Rick is survived and missed by his son Tony, daughter-in-law Krystina, grandchildren oldest to youngest: Morgan, Macy, Evan, Tyra, Jenson and his “little stinker” Olivia, four great grandchildren oldest to youngest: Nolan, Mylee, Nora and Maverik, brother Chuck (Brenda) Russell, sister Peggy (Terry) Schultz, nieces and nephews oldest ot youngest; Lisa, Steve, Jason, Jaime, Jeremy, Chris, Little Chuck and Cody. Rick was preceded in death by his father Chester Russell, mother Donna (Feeney) Russell, sister Barb Russell, and daughter Gina (Russell) Mann. Here are a few words from the man, the myth, the legend. Do not weep for me I lived the life I chose I loved I laughed and cried I would have lived longer if I had to choose but the choice was not mine So misss me but do not cry for me remember that life never ends and I shall live forever in your heart. Rick Russell The family of Rick would like to thank the staff of Marion General Hospital for the care and kindness that he and his family had received. In Lieu of flowers, please make a contribution to your local hospice. The family will be holding a celebration of life for Rick on April 27, 2019 from 12:00-5:00 p.m. at Shellukes Bar & Grill 1673 E. State St. Fremont, OH 43320. Affordable Cremation and Funeral Services of Ohio has been entrusted with the arrangements. To extend a condolence or share a memory visit www.cremationservicesofohio.com

The family of Richard A. Russell created this Life Tributes page to make it easy to share your memories.

Send flowers to the Russell family.