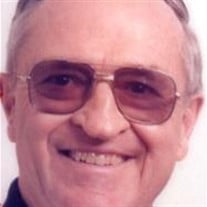 On September 7, 2019, Randall Logus Huffman passed away after a brief stay in Marion General Hospital. Randall’s family gratefully acknowledges the hospital and hospice personnel who worked very hard to make Randall’s final days as comfortable as possible, and the wonderful support from the Primrose community where Randall and his wife have lived for the past several years. Randall was born February 26, 1929, in Richmond, Indiana. In his youth he lived in Euclid, Ohio and graduated from Euclid Shore High School in 1947. He graduated from the Ohio State University in 1951 with a bachelor’s degree in agriculture. In 1951, he married Betty Hoopes of La Rue. They lived on a farm in the La Rue area from 1952 until 2013, then moving to the Primrose Retirement Community in Marion, Ohio. Here Randall enjoyed mowing and improving the grounds along and near the community property. The Marion Star printed “Mr. Mower Man” detailing his contribution to the community. He is survived by his wife, Betty and his three children, Lee (Graham Devey) Huffman in Palmerston North, New Zealand, Mark (Maggie Fillmore) Huffman in San Anselmo, California, and Vi Huffman in Bozeman, Montana. He is also survived by two grandchildren, Troy Huffman-Devey, a graduate of Duke University, and Lane Huffman-Devey, a graduate of Victoria University in New Zealand. Randall was preceded in death by his mother Pansy Faye Huffman Woodward in 1991, age 91, and his father Elmer Huffman in 1957, age 52. He farmed for 29 years, 1951-1980: dairy for 10 years and grain and hay farming for 19 years. He returned to college and in 1964 earned a bachelor’s degree in education. From 1964 until 1991, he taught science and mathematics in the River Valley Middle School. In 1981, he received a master’s degree in education from Ohio State University. While at River Valley, he developed and implemented a hands-on approach in teaching science (laboratory experience) and in mathematics (math manipulatives) for the seventh and eighth grade students. Randall produced a math curriculum for three levels of student ability. After using this program for ten years, he was asked to write a pre-algebra curriculum for seventh grade by the Marion County Education Office. Randall was a former member of the Marion YMCA board of directors. He was past president of the Marion Aquatic Club. He was one of the very early presidents of the National Holstein Futurity, started in Marion, an inspiration of Ferd Lawrence. He won a first place award at the Chicago Hay and Grain Show for hay raised on the La Rue farm. He was a member of the La Rue United Methodist Church and also the La Rue Masonic Lodge in respect to his father-in-law, Dr. Harry Hoopes. Randall was a sports enthusiast. He played organized basketball every year from the 6th grade to the age of 45. Then he participated in many running events to the age of 57, running over 13,000 miles in daily workouts. In 1984, at the age of 55, he entered a new arena of sport. Archery became his avocation. In 1988, less than three years into his new sport, he qualified for and participated in his first Olympic Trials. He also took part in the 1992 and 1996 Olympic Trials. In 1987, he was the Ohio All-Events Champion in Archery. In 2002, at the age of 73, he competed in archery events in the World masters Meet in Melbourne Australia, earning a bronze medal. In 2006, in the Outdoor National Archery Championships, he held first place in the 70+ age group. In 2007, at the age of 78 he placed second in the same age category. In 2013, in his last archery competition at the national level, held in Cleveland, at age 84, Randall again brought home a top three finish, capturing the bronze medal. Randall also hosted archery tournaments. He carved out a 70-acre archery field course on the farm near La Rue and over a 20 year period, 1991-2010, he hosted over 24 local, regional, state and national archery events on the farm. In 2006, he was inducted into his Euclid High School Sports Hall of Fame for his lifetime achievement in sports. Randall felt that life was really heaven on earth. A Celebration of Life will take place at 2:00 p.m. on Tuesday, September 24, at the Huffman farm, 8955 La Rue-De Cliff Road, La Rue. In lieu of flowers, if you wish to, please make a donation in Randall’s memory to the charity of your choice.

The family of Randall Logus Huffman created this Life Tributes page to make it easy to share your memories.

On September 7, 2019, Randall Logus Huffman passed away after...

Send flowers to the Huffman family.