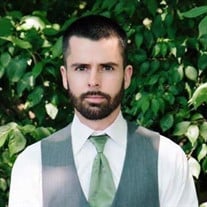 Nicholas Eric McCall, 31, was born April 6 ,1990 and turned to stardust after a 2-year battle with Brain Cancer on Saturday, February 19,2022. His spirit never gave in and never gave up, his body did. Nick served with honor in the United States Marine Corps where he quickly moved up in rank- of this he was most proud. The Marine Corps shaped his whole being- from the tattoo on his right arm to the way he made the bed, to his fighting spirit, nothing that Nick did was anything but “Marine." He would ultimately give the ultimate sacrifice for his country due to exposure from burn pits on a single tour in Afghanistan. His story is not uncommon, but it is tragic. He barely lived a life. The only thing he loved more than his time in the Corps was the family he chose: his wife, Lana Hiott, and their 3 children: son, Kallen (5) and boy/girl twins, Roark and Freyja (3). Of all places, the couple met on Tinder in 2015 and in less than a month the pair knew that they were soulmates. Letters kept back and forth shed memories on how quickly they promised to be there for one another no matter what. They married in their kitchen in 2019, never having a ceremony, just a mere month before Nick’s first brain surgery. Nick was kind. He was quiet and didn’t say much but at the times he did speak, it meant something. It was hilarious or it was important. You wanted to pay attention either way. The “deez nuts” jokes were unending. He considered himself a true Viking and was committed to keeping his beard looking the best. After radiation and chemotherapy as well as immunotherapy, somehow his hair was still thicker than most of the population. He built his own computers (yes, plural, and he would probably like to add that having two SSD’s is important because one can be used for gaming and the other for operation-whatever that means). His death was unexpected and a true loss. His memory will forever live on through his deep love of his Wolfpack- his chosen family and friends. “Not going peacefully, quietly, without a Fight.” In honor of Nick, there will be a private celebration at a later date. We find comfort in his memory and welcome your help in making this a memorable time for all. If you have pictures and/or stories that you would like to share or contribute, please send them to Lana at [email protected] We want to express our heartfelt gratitude for all who have lifted us up in prayer, and the outpouring of love and support during this impossibly cruel time. Affordable Cremation Services of Ohio was honored to serve Nick’s family.

Nicholas Eric McCall, 31, was born April 6 ,1990 and turned to stardust after a 2-year battle with Brain Cancer on Saturday, February 19,2022. His spirit never gave in and never gave up, his body did. Nick served with honor in the United States... View Obituary & Service Information

The family of Nicholas E McCall created this Life Tributes page to make it easy to share your memories.

Send flowers to the McCall family.