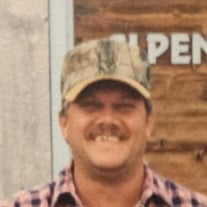 Michael (Mike) James Dailey, 69, passed away unexpectedly at his home on March 19, 2021. Mike graduated from Elgin High School in 1970. After graduation, Mike proudly served his country in the U. S. Army. He spent over 20 years working for Boise Cascade (Gaylord) in Marion and then made the choice to move on to Honda of America, where he worked another 20 years before his retirement. Mike enjoyed multiple hobbies throughout his 69 years. He spent his time fishing, hunting, golfing, bowling, and playing softball. He was also an avid gardener and woodworker, building most of the tables and stands in his home. Mike was an intimidating man that would often proclaim his hatred of humanity but he would be the first to lend a hand to anyone in need. He was not afraid to be the unsolicited voice of reason. He told it like it was, even if it was hard to hear. He truly had a heart of gold. A 26 year resident of his apartment complex, he bolted a large “Not Welcome, Stay Away” sign beside his door. But to everyone in the complex, he was a listening ear, a shoulder to lean on, a protector, a helping hand, and so much more. He gave vegetables to those in need from his little garden and often, to the dismay of those close to him, he was known to lend out his own vehicle to some residents in the complex when they needed to get to work or haul furniture. No other love in the world is like the love a father has for his daughters. Mike loved his daughters and grandkids with a fierceness that can never be matched or replaced. He was their #1 fan. He saw himself as a simple man but in the eyes of those that loved him, he was and will always be the definition of strength, courage, honor, selflessness, and love. He was the one that hung the moon. Mike will forever be missed and loved by his family and friends. He is survived by his three loving daughters, Jessica (Jimmy) Baker, Heather (Josh) Brake, and Amy Stuff; Beloved grandchildren, Michael Stuff, Hailey Stuff, Kyle Baker, Tyler Baker, Draven Brake, Kalissa Brake, Katelynn Baker, and Aaron Baker, and three great grandchildren; his brothers Robert (Sara) Dailey and Jeffrey (Julie) Dailey; his sister, Linda Steed; as well as his nieces and nephews. He is preceded in death by his mother, Dorothy Dailey, father, James Dailey, and granddaughter, Mercedes Baker. A celebration of Mike’s life will be held at the Professional Park Apartments office complex in Marion on April 17, 2021, 2:00-4:00pm. With May 1, 2021, 2:00-4:00pm, as an alternate day in case of inclement weather.

Michael (Mike) James Dailey, 69, passed away unexpectedly at his home on March 19, 2021. Mike graduated from Elgin High School in 1970. After graduation, Mike proudly served his country in the U. S. Army. He spent over 20 years working for Boise... View Obituary & Service Information

The family of Michael J. Dailey created this Life Tributes page to make it easy to share your memories.

Send flowers to the Dailey family.