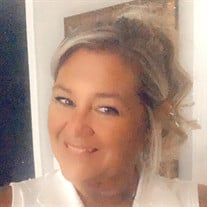 Surrounded by her family Kimberly Gale Smith age 47 of Marion went home to be with the Lord on October 11, 2021. She was born August 1, 1974 to Pastor Terry Cudd and Pamela Cudd- Gruber. Kimberly married Micheal Smith on November 7, 1998 and he survives in Marion along with their daughter Mackenzie Smith of Marion. Kimberly is survived by mother Pamela (Allen) Gruber, mother in law Barb (Fritz) Smith, sister Terri Lynn (Billy) Brake, Julie (Larry) Hoffman, sister in law Missy Large, step sister Jenny (Joel) Hagy, step sister Dena (Brad) Seckel, nieces and nephews Melissa Stewart, Jesse and Jenna Pfeiffer, Colton Hoffman, Matt and Katlyn Large, Harper and Campbell Hagy, Logan and Cora Glosser, She is also survived by Sanya Davis, Aleena Davis, Angela Pifer, Tyler Blood, and Madison Blood. She was preceded in death by her father Pastor Terry Cudd, father in law Micheal Smith Sr., sister Candace Lindsay, niece Krystal Pena. Kimberly graduated from River Valley class of 1992. She was a conveyor attendant at Whirlpool and started real estate classes at Marion Tech. Kimberly loved the lord and was a member of Central Baptist Church and for 37 years a member of the Caledonia Baptist Temple. In 1999 she had the best and only child Mackenzie. Kimberly loved the beach especially Panama City Beach, FL because the sky was above, the sand below and she found peace within. She was an avid OSU fan. Kimberly was a loving wife, mother, daughter, sister and was constantly serving those around her. She will be missed by all including her dogs Bailey and Dallas. Visitation will be held on Friday October 15, 2021 from 2pm-6pm at the former Caledonia Baptist Temple 1307 Caledonia Ashley Rd. (State Rtr. 746) Caledonia, OH 43314. Funeral will be held Saturday at 11am at the Temple in Caledonia with Pastor David Rush officiating. Memorials may be made to Central Baptist Church or Fairpark Baptist Church. Condolences may be made at cremationservicesofohio.com. Affordable Cremation Services of Ohio was honored to serve Kimberly’s family.

Surrounded by her family Kimberly Gale Smith age 47 of Marion went home to be with the Lord on October 11, 2021. She was born August 1, 1974 to Pastor Terry Cudd and Pamela Cudd- Gruber. Kimberly married Micheal Smith on November 7, 1998 and... View Obituary & Service Information

The family of Kimberly Gale Smith created this Life Tributes page to make it easy to share your memories.

Surrounded by her family Kimberly Gale Smith age 47 of Marion...

Send flowers to the Smith family.