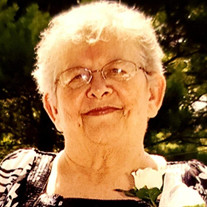 Judith Marie Goode, 81, of Marion passed away on September 18, 2020 in Marion General Hospital. She was born on August 14, 1939 in Sandusky, Ohio to the late Charles and Kathryn (Payne) Hush. On July 1, 1961 she married Artice Ray Goode whom she spent 53 years with, he preceded her in death on April 22, 2015. She is survived by her children, Timothy R. (Donya) Goode of Louisville, Kentucky, Joanne M. (Bill) Brooks of Marion, Ohio, Tonya R. (Mark) Diaz of Marion, Ohio; Her grandchildren, Alexandria, Chaquille (Ashley), Devon, Arielle, Kyron, Kierstan, Thalia, and Caleb; Her great grandchildren, Zenith and Nile who is expected to join the family soon; her siblings, Barbara Cottey, Trudy (Tom) Smith, Rosemary Miller, Russell Hush, Charles (Karen) Hush, and Robert (Phyllis) Hush; as well as numerous nieces, nephews, and great nieces and nephews. She is preceded in death by her son, Thomas Goode, her siblings, Donald Hush, Harry Hush, Richard Hush, and Elizabeth Winters. Judith was a 1957 graduate from Sandusky High School. She worked for many years for Meijer’s where she retired. Prior to working for Meijer’s, she was dedicated to staying home with the children and making sure they had everything they needed. She was a highly intelligent lady who could not be stumped on math problems. She enjoyed her quiet time taking naps and working on word finds and Sudoku puzzles. She volunteered for many school activities over the years. She was president of MARMO (Margaretta High School Band Boosters). She loved to bake and from Thanksgiving to Christmas, she would bake cookies. She and the family usually made over 500 dozen throughout the holidays. A Celebration of Life Service will be held on Saturday, October 3, 2020 from 1-4 pm at Castalia Lions Club, 607 North Washington Street, Castalia, Ohio 44824. Memorial contributions may be given in Judith’s Memory through Affordable Cremation & Funeral Services of Ohio, 1701 Marion Williamsport Road East, Marion, Ohio 43302. Affordable Cremation & Funeral Services of Ohio is honored to serve the family of Judith Marie Goode.

Judith Marie Goode, 81, of Marion passed away on September 18, 2020 in Marion General Hospital. She was born on August 14, 1939 in Sandusky, Ohio to the late Charles and Kathryn (Payne) Hush. On July 1, 1961 she married Artice Ray Goode whom... View Obituary & Service Information

The family of Judith Marie Goode created this Life Tributes page to make it easy to share your memories.

Send flowers to the Goode family.