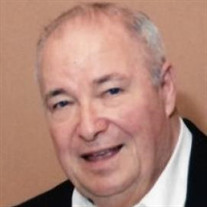 John “Johnny” Martin Terry of Marion, Ohio was called home to be with his savior on Saturday February 17. Born September 17,1933 in Greenup, Kentucky. John was loved and cherished by many and will be dearly missed by us all. He was preceded in death by his parents Martin & Mary Susan “Suze” (Payne) Terry. His only child Richard “Ricky” Terry. And a sister Phyllis (Terry) Walker. He is survived by his wife and life- long love of 64 years Jessie (Akers) Terry who spent every minute by his side until the very end. He is also survived by a sister Lillian (Terry) Fields, a daughter-in-law Beverly Terry, a close ex-daughter-in-law Brenda Terry, his grandchildren Conrad(Curt) &Tina (Terry) Floridia lll ;Shawn & Lena Terry, step- grandchildren Jaime (Luyster) Courtney, David Luyster, and Luara (Luyster) Pineda, great grandchildren Zachary and Colton Wilson; Dustin, Christopher and Shawna Terry; Kourtney & Sierra Floridia; Katie and Ryan McCurry; Sarah Samples, Antonio, Elena, & DeMarkis Pineda, and a great-great grandchild Noah Terry all of Marion, And many nieces and nephews. A member of the United Steel workers Union, he worked for 47 years for the Marion Power Shovel where he retired to spending many afternoons sitting happy on his front porch with his dog Blondie. If he wasn’t sitting on his porch he was visiting his family, clowning with “the Guys” at the STAR shop across the street, fishing at Lake Erie with his buddy Larry. He belonged to the Marion CB club where he went by the handle Crane Hop. For many years he played Santa Claus for countless number of children in and around Marion. He always stayed a kid at heart and would give the shirt off his back to help people. If you knew John you had a friend, he could talk to a stranger like an old friend. He was always about standing by his family through thick and thin and in the end that was how he departed from this earth surrounded by his family that loved him with all their hearts. Calling hours will be Tuesday February 20 from 6pm-8pm at Marion Enterprise Baptist Church and the funeral will be Wednesday February 21 at 1pm at Marion Enterprise Baptist Church. Pastor James McIntire will officiate and burial will follow in Grand Prairie Cemetery. Expressions of sympathy can be left at www.cremationservicesofohio and Pirnstill Funeral Service, 1701 Marion Williamsport Rd. is assisting the family with arrangements.

John &#8220;Johnny&#8221; Martin Terry of Marion, Ohio was called home to be with his savior on Saturday February 17. Born September 17,1933 in Greenup, Kentucky. John was loved and cherished by many and will be dearly missed by us all. He... View Obituary & Service Information

The family of John (Johnny) Martin Terry created this Life Tributes page to make it easy to share your memories.

Send flowers to the Terry family.