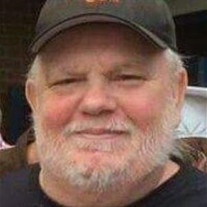 Jesse D Kalb of Wharton OH passed away unexpectedly on Sunday April 1,2018 at his home. He was born on January 10, 1956 to the late Ioma E (Dean) Kalb who preceded him in death in 1988 and James (Barb) Kalb of Forest,OH. Surviving are his children Emma (Neal) Fout of Kenton ; Jeremy (Karie) Kalb of Forest ; April (Dwight) Tanner of Carey; Nikki Barnett (Marcus Levering) of Marsellies ; Jessi Lee Kalb of Ridgeway; and Ty Kalb of Dunkirk. 11 grandchildren; Nathan and Keaton Fout, Jaylin and Lily Kalb, JR and Dana Roberts, Taylor Woodruff, Reese Levering, Troy Cameron, and Addyson and Kashley Ansley. A brother Herbie Kalb of Wharton, step sisters Peble Click of Kenton, Donna Ratliff of Forest. As well as numerous nieces and nephews. A lifetime long friend that he loves as a son Lil Joe Fabo. Also preceding him in death are a brother James Kalb and step brother Charlie Click. Jesse attended Riverdale High School but graduated from Kenton High School in 1974. Jesse spent his career as a Welder from welding train cars at International Car, to Army tanks at General Dynamics, to axles at Rockwell, but he retired his welding career welding Army tanks at General Dynamics. He was a man that loved his sports from being a avid Cleveland Browns,Cleveland Indians, and Ohio State Buckeyes fan. He enjoyed watching his grandkids play the sports he loved. In his younger days he enjoyed playing softball with his family and friends. Jesse also had a love for hunting where he spent countless nights out in the woods with his coon dogs, he also enjoyed when he could talk his children to join him. What he loved the most were his children and grandchildren which he couldn't of been any prouder of each and every one of them. Jesse will truly be remembered for his wild stories he would try his hardest to get you to believe and the giggle that followed when he knew that people believed them. His orneriness and his aggravating practical joke playing will definitely will be missed by all, as well as the great man he was. A Celebration of Life Service will be held on Saturday April 7 at 11:00 am in the First Baptist Church in Forest with Pastor James Robinette officiating. Private burial will be held at a later date in Wyandot Jackson Cemetery. The family will receive friends at the church from 10:00 am Saturday until the time of the service. The family ask for casual attire and to join them after the services to continue celebrating the life of Jesse at the Kenton Eagles. Donations can be made to the family or to the Kenton Eagles Women's Aux to help with the celebration of life. Affordable Cremation Services of Ohio, 1701 Marion Williamsport Rd. Marion is assisting the family with arrangements.

Jesse D Kalb of Wharton OH passed away unexpectedly on Sunday April 1,2018 at his home. He was born on January 10, 1956 to the late Ioma E (Dean) Kalb who preceded him in death in 1988 and James (Barb) Kalb of Forest,OH. Surviving are his... View Obituary & Service Information

The family of Jesse D. Kalb created this Life Tributes page to make it easy to share your memories.

Send flowers to the Kalb family.