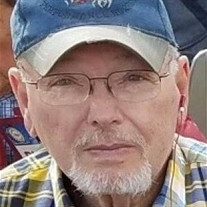 Heaven opened its gates to James Carl “Jim” Jonsson in the early morning hours of Thursday, July 6, 2017. He suffered a massive heart attack at home. Jim was born March 24, 1943 to George B. “Pat” & Sarah Irivne “Sally” Jonsson in Marion, OH. He was the older brother to Richard A. “Rick” Jonsson. Both his parents and his brother have processed him in death. He is a graduate of the class of 1961 from Marion Harding High School. Jim lived and rich and interesting life. He developed and operated a successful horse hauling company, Rockin’ J Transportation, and loved hauling horses all over the U.S. for the past 12 years. After every haul, he would call home and exclaim, “Another damm fine job done by Rockin’ J Transportation”, and he would follow that by saying, “I’ve got the best job in the world”! Jim is survived by his wife of 48 years, Linda Jonsson. He was a wonderful “Dad” to his two children Christine (Mike) Hulme of Piqua, OH, and Patrick (Laura) Jonsson of Howard, OH, and honorary son, Derek Barkley. He was “Grumpy” to his four granddaughters, Savannah, Lydia, and Vivian Hulme, and Reatta Jonsson. He is also survived by his Saturday morning buddies at Chappy’s Hydraulics, his workout friends at the YMCA, and his close friends across the country, Steve, Gordon, Walt, George, and Toby. Calling hours will be held on Sunday, July 16, 2017, in the reception room of the First Presbyterian Church, 143 S. Prospect St. in Marion, OH from 3-4 pm, followed by a memorial service at 4pm with the Pastor Kazy Hines, the former Reverend of the Westminister Presbyterian Church of Piqua, OH will officiate.

The family of James Carl Jonsson created this Life Tributes page to make it easy to share your memories.

Heaven opened its gates to James Carl “Jim” Jonsson in the early...

Send flowers to the Jonsson family.