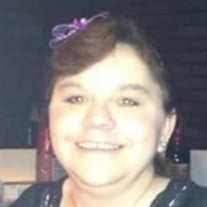 Helen F. Whalen, 59, died at 10:47 PM on September 7, 2021 at Kenton Nursing and Rehabilitation. Helen was born August 9, 1962 in Sidney, Ohio to Leonard and Alice Funk, their first child. Alice passed away in 2009. Leonard survives. Helen had two younger siblings, Leonard (Jr.) and Russell. Russell passed away in 2007. Her first child Robert was born in 1980 and her second, Scarlet, in 1982. It was in 1983 she first met Kenneth (Kenny) Whalen. They married on September 2nd of that year and Kenneth formally adopted both children. Their family was completed the following year with the birth of their daughter LaToya. Helen was like most people, trying to be happy in life. She made her mistakes and had her moments of bliss. She could be fun and entertaining, the center of attention; she could also be hot tempered and stubborn, a trait that runs in the family. She loved the Chicago Bears and the Cubs and didn't miss an opportunity in an area of abundant Indians fans to proudly remind them who the champions of 2016 were. She rooted for Notre Dame and booed the Buckeyes. Even if her voice was the lone one, she made sure she was heard. She loved NASCAR as well, especially the Earnhardts. For many years, though, her favorite activity was karaoke with Kenny. They made many friends at the American Legion and Moose Lodge, singing and laughing, while Helen enjoyed the occasional Black Velvet. Kenny died August 16th, 2018. Unfortunately, Helen's spirit began to fade that day. Helen, who had kidney disease that led to failure, would fight one moment then want to give up the next. She said since that August day all she wanted was to be with Kenny. Now she is. She is survived by her son Robert and daughters Scarlet (James) Warren and LaToya (Kris) Toland and all of her grandchildren: Ike, Lena, Sage, Quinn, Bryan, Olivia, Victoria, Jacob, Patsy, Rihanna, Kenny, Isaiah, JJ, and Patrick. She also leaves behind her beloved - and spoiled - dachshund Yoshi. Per her wishes, there will be no visitation or funeral. Special thanks from the family to the staffs of Marion General Hospital, Hardin Memorial Hospital, and the Kenton Nursing and Rehabilitation Center; Hospice nurses Michelle and Mark; and Brianna Funk.

The family of Helen F. Whalen created this Life Tributes page to make it easy to share your memories.

Send flowers to the Whalen family.