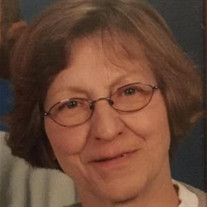 Hannelore Erika Fogle, 73 of Marion passed away on Saturday May 26, 2018 at home. Hannelore was born October 4, 1944 in Viernheim, Germany to the late Richard and Helena (Wolf) Borchert. She was married June 11, 1965 to Robert “Bob” Joy Fogle who preceded her in death on July 29, 2012. Hannelore is survived by children William Thomas Fogle of Marion; Teresa Michelle (Darian) Beachy of Braunfels, TX; Richard Joy Fogle of Marion; and Chad Everett (Adrienne) Fogle of Marion; grandchildren Madyson, Casey, Justin, Katlyn, Camryn (husband Colton), Christian, Kendra, Mitchell, and Keagan; three great grandchildren; faithful companion Jasmine; as well as siblings, Hanna was the fourth of 8 children. Hanna graduated Nursing School in April of 1965 and worked at the City Hospital in Mannheim, Germany. She met her husband Bob while he was in the U.S. Army stationed in Germany from 1963-1966. Hannelore and Bob moved to Marion in 1967 following which they lived in Kinston, NC for several years and she moved back to Marion in 2013. Hanna served as the Clinical Supervisor, EMS Coordinator of the Emergency Department of MedCenter Hospital at The FC Smith Clinic for several years. She cherished all the memories and all the staff. She took pride in staying with her coworkers until the doors of the ER closed permanently. Aside from being dedicated to her work, Hanna was dedicated to her family and had a strong faith. Amongst her countless hours of stories, her thick German accent, her home cooking and her gentle touch, Hanna will be greatly missed. A graveside service will be held on Friday June 8, 2018 at 11:00 am in Marion Cemetery. In lieu of flowers the family suggests memorials be made to the Ohio Health Hospice through Affordable Cremation Services of Ohio, 1701 Marion Williamsport Rd., Marion, OH 43302 and expressions of sympathy can be left at www.cremationservicesofohio.com.

The family of Hannelore Erika Fogle created this Life Tributes page to make it easy to share your memories.

Hannelore Erika Fogle, 73 of Marion passed away on Saturday May...

Send flowers to the Fogle family.