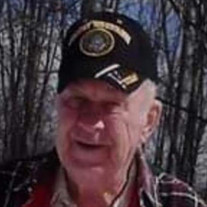 Gerald R. Hamrick 88 of Webster Springs, WV passed away peacefully at home on Aug. 26, 2021 in Marion, OH. Gerald “Buster” Hamick is the son of the late William Homer Hamrick and Belva Dora Coakley Hamrick of Webster Springs, WV. He is preceded in death by his daughter Elizabeth A. “Sissy” of Marion, OH, his wife of 50+ years Beatrice Mae Cutlip Hamrick, 3 brothers, Paul E. Hamrick of Grand Bay, Al, William Homer Hamrick Jr, of Webster Springs, W VA, Madison “Doc” Hamrick of MN, 2 sisters Geneva B. Denson of NC, Janice Alma Gerwig of Webster Springs WV. Gerald is survived by one sister Elizabeth A. Hamrick of Milton, DE, and had 6 children Gerald D. Hamrick (Donna) of PA., step-daugther Mona Grant (Gary) of Marion, OH, Randy L. Cutlip (Teresa), Lorain, OH, Beatrice L. Hamrick “Sil” (Steve Jerew) Richwood, OH, Geri R. Wilson (Steve Wilson) Marion, OH, 17 grandchildren and many great grandchildren. Gerald joined the Army in 1953, he received many medals for his service, serving in Germany. After receiving his honorable discharge he moved to Lorain, OH in the 60's. He drove truck for over 30 years at US Steel, for Erie Blacktop, Elmer Hercular and Herk in Vermilion, OH. He was proud member of Teamsters/VFW. After retiring he moved to Marion, OH for a brief time before returning home to WV. Everybody knew Gerald, he would talk to anyone, even if they didn’t want him to. He was always out “running the roads” as his wife would say. He liked his beer and telling stories and jokes. He was always willing to help someone out, if there was something you needed and he had it, he would give it to you. He would always have a story or something to show you if you came around. He would find things along the road or at yard sales while he was out and be sure to show you what he found. Most of the time those things were given away to people later on. He would say, if I had half the things I've given away over the years I'd be rich. He was definitely a character, especially at the grocery stores where he lived in Sutton, Gassaway WV, always cracking jokes with the employees. He worked a side job for a security company there in the area for something to keep him busy and to help out keeping places safe. He then moved to Marion in 2016 to be around family for his remaining years. Gerald will be laid to rest with his wife at Rose Hill Cemetery, Nicholas County, WV. Affordable Cremation Services has been entrusted with the arrangements.

The family of Gerald R Hamrick created this Life Tributes page to make it easy to share your memories.

Send flowers to the Hamrick family.