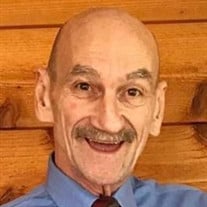 Gary “Dean” Henderson age 68 of Richwood went to be with his lord and savior Thursday July 29th, 2021. He passed peacefully in his home surrounded by his loved ones. He was cared for in the home by his own personal team of nurse Mattie and Katherine. Dean was a lifelong resident of Richwood Ohio and graduated from North Union in 1971. After high school dean held many jobs as he always said “I am the jack of all trades and the master of none”. He worked for Ranco for 15 years until the company closed. Dean was an avid painter for the remainder of his years. His favorite past times were fishing and spending time with his grandchildren and great grandchildren who were the light of his life. Dean met the love of his life Kathy Hendrickson September 3, 1975. They were married on July 13th, 1998. Dean was a dedicated member of Community United Calvary church. He became an ordained minister and loved serving the lord. Dean was proceeded in death by his mother and father Helen and George Henderson both of Richwood and a brother and sister-in-law Georgetta (Jeff) short and brother-in-law Rex Baldwin. Dean is survived in death by the love of his life Kathy Henderson (Richwood), Children Steve (Lucille) Jerew of Richwood, Kim (Vince) Vance of prospect. Grandchildren Mattie (Keith) Pickett of Tennessee and their children Keileigh, Zachary, Malia, Brycen and Bailey. Joseph (KC) North of Richwood, Katherine North of Richwood and he so Kody Park. Chance Jerew of Richwood and his daughter Raelynn, Alisha Bell of north Lewisburg and her children Jayden, Camden and Emalin. Hunter Jerew of Richwood and her daughter Kyliann Jerew, Katie Nelson and her children Daniel and Remmington. He is also survived by siblings Debbie Baldwin of Richwood, Christie Henderson hunter of Richwood, Jerry (Terry) Henderson of East Liverpool and Terry (Tammy) Henderson of Marion and many nieces and nephews. The family would like to thank the Tranquility Hospice team for all the love and care they provided. A special thank you to Adam Ralph, Andria Delauder, and Teirra Brady. All Condolences can be made to Tranquility Hospice. A Celebration of Life service will be held on a later date. Affordable Cremation & Funeral Services of Ohio was honored to serve Gary's family. Visit www.cremationservicesofohio.com to extend a condolence or share a memory.

Gary &#8220;Dean&#8221; Henderson age 68 of Richwood went to be with his lord and savior Thursday July 29th, 2021. He passed peacefully in his home surrounded by his loved ones. He was cared for in the home by his own personal team of nurse... View Obituary & Service Information

The family of Gary Henderson created this Life Tributes page to make it easy to share your memories.

Gary “Dean” Henderson age 68 of Richwood went to be with his...

Send flowers to the Henderson family.