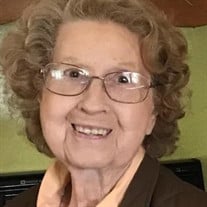 Evelyn Lucille Grindell-Predmore-Thomas, 87 of Kenton fell asleep in death on November 26, 2018. Evelyn was born December 9, 1930 in Kenton, OH to the late Harold and Marie (Columber) Grindell. She married Thomas Gene Predmore on September 22, 1952, he preceded her in death on March 9, 1965. In 1968 Evelyn married Paul A. Thomas who preceded her in death in May 1980. She was also preceded in death by grandson David George and two brothers Lauren and Robert Grindell. Evelyn is survived by three daughters Christine (Rodney) George, Charlene (Randy) George, and Laure (Rick) Brown; sister Colleen Brown; half brother Larry Grindell; half sister Debbie Messer Rider; grandchildren Joe (Emily) George, Amanda (Joshua) Davis, Matthew (Kelsey) George, Tiffany Seiving, Janae (Trenton) Smith, Bethany (Logan) Spaulding, Kaleb Brown, Kailey (Benjamin) Valerio; as well as 12 great grandchildren. Evelyn worked at Schneider's Drug Store, Kenton Times, Uhlmans, Stage, K-Mart, and Peebles, where she retired in 2016. She was baptized as one of Jehovah's Witnesses on May 3, 1975. Evelyn's greatest joy was spending time with her children and grandchildren. A Memorial Service will be held on Saturday December 8, 2018 at 3:00 pm in the Kingdom Hall of Jehovah's Witnesses, 1500 Main St., Kenton with Jeremy Stidham, Elder officiating. Private burial will be held in Grove Cemetery, Kenton. The family will receive friends at the Kingdom Hall on Saturday from 1:00 pm until the time of the service. The family suggests memorials be made to the Worldwide Work of Jehovah's Witnesses either through the Kingdom Hall in Kenton or online at donate.jw.org. Affordable Cremation Services of Ohio, Marion is assisting with arrangements and expressions of sympathy can be left at www.cremationservicesofohio.com.

The family of Evelyn Lucille Grindell- Predmore-Thomas created this Life Tributes page to make it easy to share your memories.