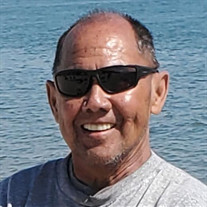 Not sure what to send?

Errol N. Van Dyck, 72 of LaRue passed away on Monday June 20, 2022 peacefully at home. Errol was born June 13, 1950 in the Dutch East Indies (Indonesia) to the late Emiel Van Dyck and Alida (Van Der Mey) Van Dyck. He was married August 4, 1973 to his loving wife, Linda (Carey) Van Dyck who survives. In addition to his parents, he was preceded in death by his two brothers Ron and John. Errol is also survived by his daughter Meredith (Ryan) Creps also of La Rue, grandsons Owen and Mitchell Creps; brother Joe Van Dyck of Delaware and sister Maudy Spears of Mt.Vernon. Errol attended St. Mary's Catholic School in Delaware and graduated from Delaware Hayes High School in 1968. He was then drafted and was a heavy equipment mechanic in the Army. He lived in Delaware OH before moving to the LaRue area in 1978. For several years Errol worked as an operations manager for Sloter Ready Mix in Grove City and for 12 years worked for Hensel Ready Mix. Errol was an avid hunter and fisherman and loved meeting new people whom he could tell his stories and share pictures with. He was very proud of his deer mounts and loved telling stories of his fishing days on the Tahquamenon River, where he fished for 45 years. Errol and Linda enjoyed trips to Port St. Joe, Fl where he loved to surf fish. Some of his best memories were of campouts in the woods with his best friends brothers Scott and Bob Stromberg and his brother Joe. In recent years he loved being outdoors with his “boys” Owen and Mitch, tinkering in his barn and taking rides on the side-by-side with his dog Pepper. He was an extremely hard worker and was very proud of his work ethic. Errol never knew a stranger and enjoyed talking and watching all sports, especially the Ohio State Buckeyes. A Celebration of Life gathering will be held on July 2 from 3 pm to 6 pm at Dry Lane Construction, 376 Dry Lane Rd. S in La Rue, Ohio. Memorial contributions can be made to the Hepburn United Methodist Church. Affordable Cremation Services of Ohio is assisting the family with arrangements and expressions of sympathy can be left at www.cremationservicesofohio.com.

The family of Errol N Van Dyck created this Life Tributes page to make it easy to share your memories.