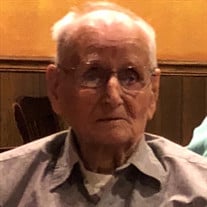 Emil Carl “Jerry” Gianero Jr. died peacefully at home on December 4, 2018 surrounded by his loving wife and children at the age of 94. On April 2, 1924 Carl was born in Rincon, New Mexico, son of the late Emil Gianero Sr. and Virginia (Baca) Gianero. Carl was drafted into the army in 1942 and received the Good Conduct Medal and WWII Victory Medal. It was during his tour of duty with the 755th Railroad Battalion that he learned the pipe fitting trade. After the war, he used this training to start his own successful plumbing and pipe fitting business that has been known as Carl’s Plumbing & Heating, Inc. from 1947 to present. He worked closely at this business with his son Dan and daughter Deborah and he was still a regular at the office up until earlier this year. It was during his time in the Army, while stationed at Camp Millard in Bucyrus,Ohio that he saw a beautiful young woman cross his path in Marion, Ohio. He later married her and their marriage has withstood the test of time for 72 years. Left to cherish his memory is his wife Loa (Bumgarner) Gianero who he lovingly refereed to as “the roadrunner” as well as their two children Dan (Pam) Gianero and Deborah (Merritt) Lance. Six grandchildren Missy (Randy) Haas, Amy (Shawn) Berry, Beth (Johnny) Sperry, Heather (Rob) Wilcox, Jeremy Brown, and Emily (Branden) Staiger. Eight great grandchildren Miranda, Morgan and Rylee Haas, Payton and Brooke Berry, and Bella, Sophie and Clay Staiger. He is also survived by his two sisters Rita (Fred) Spencer and Georgene (Craig) Moore. He was preceded in death by his oldest sister Martha (George) Kight. Carl was an avid hunter and his passion and skill are proudly displayed at his home with the many trophies he has accumulated over the years. He has hunted all over the United States including Alaska, British Columbia, and Hawaii, but his favorite place was always Meeker, Colorado. His many trophies include the “grand slam” in desert sheep, grizzly bear, elk, moose, deer, antelope and wild turkey. Carl was an inspiration and a hero to his entire family. A man of few complaints, he led a quiet, unassuming life enjoying his family, his home, his business and his passion for hunting. In lieu of flowers, contributions may be made to Ohio Health Hospice. A special thank you goes out to his hospice nurses Suzette, Polly, and Julie. Also his wonderful hospice aids Laura and Teresa and his exceptional caregivers Roger and Angel. A private graveside service will be held at a later date.

The family of Emil Carl "Jerry" Gianero created this Life Tributes page to make it easy to share your memories.

Send flowers to the Gianero family.