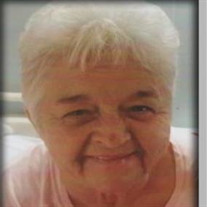 Donna F. (Holsinger)Toland, 66, of Marion, OH passed away at her home on May 6, 2016 at 1:40 a.m., surrounded by her loving family. Donna was born April 25, 1950 in Sciotoville, OH to the late Carl and Daisy (Tackett)Holsinger. She was married to James W. Toland Sr. on July 22, 1967, whom still survives her. Donna is, also, survived by three sons; James(Tina) Toland Jr; Timothy(Olivia) Toland, Samuel(Krystal) Toland; her only daughter, Tammy Toland; and the granddaughter that she raised like her own, Alexis Toland, all of Marion, OH. Donna is survived by eleven additional grandchildren; Michael(Mary) Stone of Delaware, OH; Laci Stone of New Florence, PA; Shawn Toland of Breckenridge, TX; Angel Toland, Destiny Donna Toland, Austen Toland, Sam Toland Jr, Alyssa Toland, Shelby Toland, Alayna Toland, all of Marion, OH; and Jordan Steinka of Midland, MI. Donna is survived by two great grandsons and eight step grandchildren. Also surviving Donna are six sisters; Tina(Jim) Blevins, Dorothy(Homer) Blevins, Phyllis Abrams, and Linda(Ron) Blair of Marion, OH; Dollie(Ronnie) Pyles of Waverly, OH; and Mary Jeffries of Albany, OH; one brother, Gary(Gail) Holsinger of Lucasville, OH. Donna has many, many nieces and nephews that, also, survive her. Besides her parents, Donna was proceeded in death by two sisters, Katherine James and Matilda Cooper; eight brothers: Roscoe Holsinger, Carl Eugene Holsinger, Harold Holsinger, Robert(Bob) Holsinger, Jack Holsinger, Floyd(Junebug) Holsinger, Roy Holsinger, and Johnny Holsinger. Donna lived all over the world with her Army husband until they moved to Marion, OH in 1991. Donna spent her life being completely devoted to her husband, children, and grandchildren. She will be dearly missed by all who knew and loved her. The family would like to extend a special thank you to Vitas Hospice Services for their compassion and care in Donna's final days of life. Services will be held on Tuesday, May 10, 2016, at Central Baptist Church, 2816 Marion-Waldo Rd. in Marion, OH with Pastor Ryan Strother officiating. There will be a calling time of 11 a.m. to 12 p.m. for immediate family only and from 12 p.m. to 2 p.m. for others wishing to pay their respects, with a short service directly afterwards, followed by burial at Brushridge/Grand Prarie Cemetary in Marion, OH. The family would, also, like to extend their gratitude to Affordable Cremation Services, 1701 Marion Williamsport Rd. Marion, OH for their compassion and kind services during Donna's final journey.

Donna F. (Holsinger)Toland, 66, of Marion, OH passed away at her home on May 6, 2016 at 1:40 a.m., surrounded by her loving family. Donna was born April 25, 1950 in Sciotoville, OH to the late Carl and Daisy (Tackett)Holsinger. She was married... View Obituary & Service Information

The family of Donna F (Holsinger) Toland created this Life Tributes page to make it easy to share your memories.