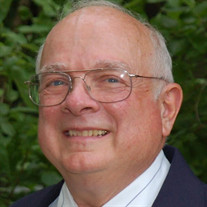 David L. Wright, age 84 of Delaware, OH, passed at Willow Brook Christian Village in Delaware on February 27, 2022. He was born on December 11, 1937 in Indianapolis, IN to Telford & Marie (Shelton) Wright. He married June Lee Robbins in Indianapolis, IN on June 4, 1960. David is survived by his wife June of Delaware; sons Stephen (Jennie) Wright, Scott (Michelle) Wright, Shawn (Melissa) Wright, and daughter Susan (Warner) Wright; brother Donald (Scarlett) Wright;12 grandchildren; Anne Wright, Emily Karboski, Dexter Wright, Andrew Karboski, Maxwell (Malori) Wright, Zane Wright, Ted Wright, Nathanael Wright, Buchanan Wright, Selah Wright, Arianna Wright and Graceyn Wright, and nephews Jeff (Brenda) Wright and Chris Wright. David graduated from Howe High School in Indianapolis in 1955. He received an associate's degree followed by a bachelor's degree in religion from Butler University in 1959, then attained his master's degree in social work from Indiana University in 1963. He was a medical social worker with the Veterans Administration for over 35 years. David attended Community of Christ church, which he served as Presiding Elder at a number of congregations (Bedford, IN; Miles City, MT; Fort Wayne, IN; and Brownsburg, IN). He moved his young family to Montana in the 1970s, where he enjoyed hunting and fishing. Upon returning to Indiana in the early 1980s, he developed a zeal for genealogy. He took up golf (or at least searching for golf balls) in his retirement years, which he continued in Delaware after moving there in 2013. Affordable Cremation Services of Ohio was honored to serve David’s family. Online condolences may be made at www.cremationservicesofohio.com

The family of David L Wright created this Life Tributes page to make it easy to share your memories.

Send flowers to the Wright family.