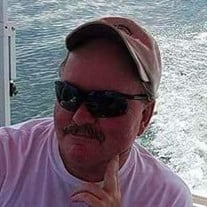 David T. Herrod died unexpectedly on December 30, 2019 at Marion General Hospital from diabetes complications. Our loving God miraculously sustained Dave for 23 hours so friends and family could surround him. Dave was born in Bucyrus, Ohio on May 14, 1960. He was immediately adopted by the late John Clinton and Lois Jean (Thompson) Herrod Sr. He is survived by brother John (Sharon) Herrod, special nephew Jerry Herrod and deceased nephew Jeff Herrod, brother Nick (Deb) Haubert, half brother Butch (Peg) Mermann, half sisters Diane Lemasters and Pauline (Dennis) Bilger. He grew up in Caledonia, OH, living there for 16 years, moved to Lake Milton, OH for a year, then on to North Lima, OH for 4 years, and Austintown, OH for a year. Dave then moved back to Caledonia where he resided from 1982 to 1996 before settling in Marion, OH. Dave was a 1978 graduate of South Range High School then attended Youngstown State University from 1978 to 1979. In 1993 David became Jane Richards mailman and married her on July 27, 1996. Jane often told people, “the Lord sent him right to my door”. He served as an Executive Board Member for the Ohio State Association of Letter Carriers, representing more than 13,000 city letter carriers across Ohio, he was the past President of the River Valley Lion's Club, member of the VFW Post 7201 in Marion, member of Meeker Sportsman's Club, member of the National Rifle Association, graduate of the National Association of Letter Carriers Leadership Academy and served as a local business agent for the National Association of Letter Carriers. His hobbies included gardening, golfing, watching and attending OSU football games, trap shooting, target shooting, camping, driving on the surf along the ocean, shell gathering and Lake Erie fishing with his Dad. Dave was a life long Cleveland Cavalier, Cleveland Browns and Cincinnati Reds fan. He also enjoyed the company of many canines: Gilligan, Lucky, Bandit, Alexander, Rudy, Krenzel, Oden and Darth Vader. Dave was a very kind, loving, humorous man who was fiercely loyal to his parents. When his widowed mother was ill, Dave went to her home at 5:30am before work or on his day off for over a year to fix her breakfast and organize her medications for the day. David also nursed his wife through a broken foot and later a broken ankle. He never skipped a beat as he cared for Jane and their three dogs including the stray that showed up at their house a week earlier. His favorite phrase was “a good story lasts a lot longer than a good time” Dave knew Jesus Christ as his Lord and Savior. He exemplified the love of Jesus by following His commandment, LOVE THY NEIGHBOR. If desired, donations may be made to Cornerstone Alliance Church in Marion or the American Diabetes Association in care of Affordable Cremation Services of Ohio 1701 Marion Williamsport Rd. East Marion, OH 43302. Visitation will be held on January 11, 2020 from 12pm to 2pm at the Cornerstone Alliance Church 2010 Marion Marysville Rd Marion, OH 43302. A memorial service will follow at 2pm also at the church with Pastor Tim Miller officiating. To share a memory or send a condolence please visit www.cremationservicesofohio.com.

The family of David Timothy Herrod created this Life Tributes page to make it easy to share your memories.

Send flowers to the Herrod family.