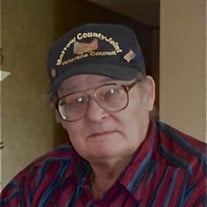 Danny Lee Street age 77 of Fredricktown died on Jan. 7, 2021 at Morrow County Hospital. He was born Apr. 15, 1943 in Marion to the late Pete and Edna (Jones) Street Gibson. He married Polly Anglemeyer in April of 1974, they were divorced, she resides in Lakeland, FL. Surviving are his children Teresa (Edward Scroggins) Street, Fredricktown, Tamara (Jason Renew) Street, Lakeland, FL, step-son William (Lisa) Ludwig, Lima, step-daughter Denise Ludwig, Lakeland, FL, grandchildren Derek Ludwig, Tyler Ludwig, Heather Sexton, Danielle Marriott, John Hurt, Danny Street, Lance Renew and Elizabeth Marriott, great grandchildren Kira and Conner Ludwig, Amari (Teenie) Sexton, sisters Barbara Vanromer and Renee (Ronald) Dennis. He is preceded in death by a granddaughter Sidney Renew, brothers John Street, David Street, Tom Street, Lee Gibson and a sister Rachel Street. He was a 1961 graduate from Pleasant High School and a Vietnam war veteran. Mr. Street was an electrician at HPM in Mt. Gilead, he had also worked at Quest Diagnostics. He was a member of AmVets Post #87, Mt. Gilead, Morrow County Joint Veterans Council and the NRA. He enjoyed playing poker and being with his grandchildren. He was his family's hero and their rock, he gave unconditional love and unending generosity, he was a strong Trump supporter. He was very funny and smart. His family always knew how much he loved them, because he always told them every time they parted. Family will meet with friends at AmVets Post #87 Mt. Gilead located at 7825 OH 61 Galion, OH 44833 on Jan, 23, 2021 from 2 p.m. until the last person shows, for a staggered celebration of life as to prevent a large gathering at once. Affordable Cremation Services of Ohio has been entrusted with the arrangements.

Danny Lee Street age 77 of Fredricktown died on Jan. 7, 2021 at Morrow County Hospital. He was born Apr. 15, 1943 in Marion to the late Pete and Edna (Jones) Street Gibson. He married Polly Anglemeyer in April of 1974, they were divorced, she... View Obituary & Service Information

The family of Danny L. Street created this Life Tributes page to make it easy to share your memories.

Send flowers to the Street family.