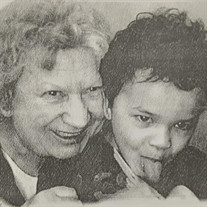 Marion – Constance “Connie” Inez Rose, age 76, of Marion, and formerly of Hillsboro and Dayton Ohio passed on February 10, 2022 following an extended illness. Connie was born on March 14, 1945 in Hazel Green, Kentucky, the daughter of the late Bernie Rose and Virginia Little. Connie worked as a beautician but her love was caring for others and she spent many years as a dedicated caregiver. Connie was blessed with her daughter, Amanda Inez Rose, on March 29, 1984. As a dedicated mother Connie was a troop leader in the Girl scouts and was delighted and proud of her troop’s achievements. She also furthered her education later in life, attending Southern State college for Computer Science but instead falling in love with pottery class. She loved creating and crafting and would spent many hours quilting with her mother, Virginia. On March 7, 2006, Amanda and Robert Johnson (Connie’s future son-in-law of North Carolina) welcomed their son, Julian Bishop Johnson. Connie fell in love at first sight and spent the rest of her life devoted to her grandson’s best interest. She held him when he was colicky, attended fieldtrips, made a million dinners, changed a billion diapers, helped sew dozens of costumes, and was a one-of-a-kind, amazing grandma. She also loved animals, James Dean, Elvis, The Beatles, games and puzzles, genealogy and buttons. She also enjoyed hearing her daughter’s progress on learning the violin and watching anime with her grandson Julian. Connie is dearly missed by her daughter, son-in-law, and grandson. A private memorial service is planned for Saturday, February 26th.

The family of Constance "Connie" Inez Rose created this Life Tributes page to make it easy to share your memories.

Send flowers to the Rose family.