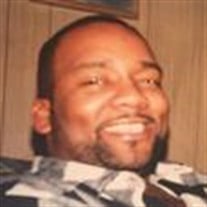 Mr. Clinton L. "Mystro" Faggs III, 52 unexpectedly passed away October 13th at his home. Clinton was a graduate form Marion Harding High School of Marion in 1983.He was employed at Whirlpool Cooperation Of Marion from 1983-1999 where he was medically separated He was a member of the Medgar Evers Elks Lodge until they closed down. Mystro was a very popular Disc Jockey in Marion and surrounding counties. He started several dance groups, "The Rocketeers" and "Step 3". He was the lead singer in the group " The Main Attraction" Mystro was a DJ for more then 40 years. Clinton Coached and participated in all sports leading both teams to be championship winners. He coached an all girls undefeated softball team, The Simsimic Drilling" and a boys midget football team , The Jets". He loved spending time coaching and participating in children's sports and helping them in any way he could. His ideal goal was to keep them on the straight and narrow and keep them off of the streets. Clinton was a born again Christian. December 2009, he was baptized by Pastor Jackie Peterson of Logos Christian Ministries. Clinton leaves to mourn 7 (seven) children. Micaela Valdez Faggs, Anthony Valdez, Crystal Valdez, JaVonna Faggs, Quinton Faggs ,Dontes Faggs, and Whitney Fisher. 12 grandchildren: E'lianna, Zayden, Courtez, Da'Onya, D'Meire, Jose', Carter, Kalaya, Ami ya, Anthony, Jayden and Kierra. He is survived by his step father David Fout, 3 sisters Donna Faggs, Charmion Faggs and Barbara (Devin) Jones all from Marion and 4 brothers Wayne (Kathy) Cosey Bucyrus, Ohio, Sean Faggs Rick Mahon and Bishop Co-re-don Rogers all of Marion. A host of nieces nephews and friends. He is proceeded in death by his paternal grand parents: Clinton L. & Barbara (McGee) Faggs. maternal grand parents Clark Rogers & Louise Rogers, his father Clinton L Faggs Jr, and Norma Jean (Faggs) Fout, he is also proceeded in death be his son LaMarr Cochran. Mystro had a lot of friends. He was an internet sensation and had a couple of videos go viral, one being," Who sleeps and eats at the same time?' and another one 'Talking in your sleep". He was a comedian and could make you laugh even if you wanted to cry. He had that positive spirit that just would change your attitude no matter your mood. A lot of people followed him on Facebook for his inspirational quotes daily or to check one insomnia club. He also leaves to mourn a special niece Martrice White and a very close friend who we called his son Derrick "Slow Joe" Gartrell. The family will receive friends on Monday October 23, 2017 at 12:00 noon in the Christ Missionary Baptist Church, 394 Fairview. Funeral Services will begin at 1:00 pm with burial to follow in Grand Prairie Cemetery at Brush Ridge. Pirnstill Funeral Services, 1701 Marion Williamsport Road is assisting with arrangements

Mr. Clinton L. "Mystro" Faggs III, 52 unexpectedly passed away October 13th at his home. Clinton was a graduate form Marion Harding High School of Marion in 1983.He was employed at Whirlpool Cooperation Of Marion from 1983-1999 where he was... View Obituary & Service Information

The family of Clinton L :Mystro" Faggs III created this Life Tributes page to make it easy to share your memories.

Send flowers to the Faggs family.