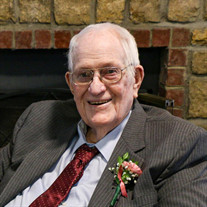 CLARENCE WAYBERN WEBB age 88 of Marion, passed on April 20, 2022 at the Wyndmoor Assisted Living surrounded by his loving family when he was called to his final resting place in Heaven with our Lord and Savior. He was born August 27, 1933, at Snake Creek, Carroll County, Virginia, to Moyier Edgar and Berta Ina (Goad) Webb. Clarence graduated from Hillsville High School, Carroll County Virginia in 1953 and then immediately enlisted in the Army. He completed a total of ten years with the Army. Two years enlisted and eight years in the reserves. In 1956 he joined the Alexandria Virginia Police Department. He had a great love for protecting and serving that he spent 42-years with the Alexandria Police Department. He started as a patrolman in 1956 and retired as a corporal in 1984. The very next day in 1984 he returned to the Alexandria Police Department as a civilian worker as their only Micro-Computer Technician reporting directly to the Chief of Police, until he retired again in 1998. In 1969 Clarence was blessed with his only child Lisa (Webb) Vitek with his first wife Irma Boggs Gustafson. Throughout Clarence’s lifetime he loved hunting, fishing, tinkering, fixing, creating fun things in his workshop, collecting antique tools and visiting yard sales. He also enjoyed working on his computer. When he wasn’t doing those things he was found perfecting his victory garden skills. He could always be found happily working in his garden and sharing his abundant bounties with friends and neighbors. He enjoyed hosting gatherings and cook-outs with friends and family. That was always the perfect time for telling stories of his younger days, showing number tricks and telling jokes (with lots of sound effects.) Above all he loved to travel and spoil his grandchildren. He was a generous, caring, and compassionate man that will be deeply missed by his friends, family and all who knew him. Clarence is survived by his daughter, Lisa Sharon (Robert) Vitek, grandchildren Kimberly Victoria Price (Zachary Kaine Morris), Rebecca Sharon Price (Kenneth Colt Spencer), Robert Tristan Vitek and Christina Elizabeth Vitek. He is also survived by an older sister, Treva Mae (Sanford, predeceased) Bowman, and four younger brothers: Moyier Bruce (Francis, predeceased) Webb, Glen Waltrude (Patricia, predeceased) Webb, James Booker (Nelldean) Webb and Scott Douglas (Victoria) Webb. He also leaves behind three great-grandchildren: Rileigh Anne Price, Greyson Lee Jenkins, and Lorenzo Adonis Morris, as well as a host of nephews, nieces, grand-nephews and grand-nieces. Clarence was predeceased by his parents, Moyier Edgar and Berta Ina (Goad) Webb, an older sister Helen Elizabeth (Webb) Myers, and infant brother Bobby Ray Webb and his second wife, Betty Rose (Elliott) Webb. A funeral service will be held on June 3, 2022, at Vaughan-Guynn-McGrady Funeral Chapel, 1035 North Main Street, Hillsville, VA 24343. Visitation at 10:00 a.m., and services commencing at 11:00 a.m. Burial service to immediately follow at the Isaac Webb Cemetery located off Red Hill Road (SR 674) just north of its intersection with Webb Drive (SR 921), Carroll County, VA.

CLARENCE WAYBERN WEBB age 88 of Marion, passed on April 20, 2022 at the Wyndmoor Assisted Living surrounded by his loving family when he was called to his final resting place in Heaven with our Lord and Savior. He was born August 27, 1933,... View Obituary & Service Information

The family of Clarence Waybern Webb created this Life Tributes page to make it easy to share your memories.

Send flowers to the Webb family.