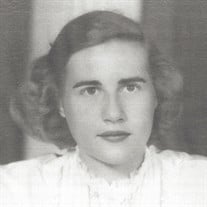 Christel Amalia Burnside, 88, of Delaware, Ohio, passed away on Thursday, May 30, at Marion General Hospital. Christel was born in Essen, Germany on January 27, 1931 to the late Theodor and Lucie (Winkelmann) Rossmann. She immigrated with her family to the United States in 1948, residing at Dayton, Ohio, where her father was employed as a physicist at Wright-Patterson Air Force Base. After high school she attended The Ohio State University, earning a Master’s Degree in Botany, the only woman in the botany graduate program at that time. While at OSU she met a young physics student, Phillips Brooks Burnside, and they married on July 3rd, 1954, remaining married for 63 years until his passing in 2017. She became a naturalized US citizen on June 7, 1957, and would proudly say that she was American, not German. Relocating to Delaware, Ohio, the family became a long-time fixture of the Northwest Neighborhood. For several decades most evenings would find Christel tending to her beloved gardens, which were well-known in town due to their diverse and unique mix of flora of all sizes, shapes and colors. Christel was an accomplished musician, teaching piano and violin lessons, performing in recorder ensembles, and playing in the original violin section of the Central Ohio Symphony Orchestra. After raising three sons, she entered the work force, and was employed by Ohio Wesleyan University for several years as the Science Librarian. Besides her parents and her husband, Christel was preceded in death by her brother Kurt (Helen) Rossmann of Chicago, IL. She is survived by three sons, Thomas Brooks (Grace) Burnside of Wheaton, MD; Paul Theodore (Paula) Burnside of Marion; and John Douglas (Kendra) Burnside of Scottsdale, AZ; five granddaughters, three grandsons, one great-granddaughter, two sisters-in-law, Mary Anne Kilburn of Columbus, OH; and Marian Burnside of Worthington, OH; and several nieces and nephews. The family would like to thank good friends and neighbors the Dillmans and Barthas for the special love and care they have shown our parents and family for many years. There will be no service. In lieu of flowers, the family suggest charitable donations be sent to: Ohio Wesleyan University – Physics Department, in care of Mowry Alumni Center, 61 S. Sandusky St., Delaware, OH 43015.

Christel Amalia Burnside, 88, of Delaware, Ohio, passed away on Thursday, May 30, at Marion General Hospital. Christel was born in Essen, Germany on January 27, 1931 to the late Theodor and Lucie (Winkelmann) Rossmann. She immigrated with... View Obituary & Service Information

The family of Christel A. Burnside created this Life Tributes page to make it easy to share your memories.

Send flowers to the Burnside family.