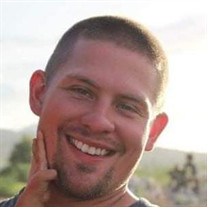 Chase Randy Miller was born on August 26, 1993 in Marion, Ohio He leaves behind his son, Aspen Grey Miller age 3, his parents Randy E Miller and Jeanie Buckner, Stepfather Michael R Buckner and brother Devin Miller. Grandparents Sally Harbolt, Jim (Pam) Buckner, Judi (Mike) Calmes. Many cousins, aunts, uncles, friends, cowokers and the woman he loved, Shandra Holsinger as well as her children Tegan, Kaysen, Nate and Reny . He is preceeded in Death by his Grandparents Robert S Harbolt Sr., Robert E Miller, Carolyn Thacker, Ed Thacker and Stepbrother Alex Michael Buckner. Chase attended Silver Street and Ridgedale Elementary and graduated from Ridgedale High School in 2011. Chase enlisted in the Navy shortly after graduating and was stationed in Jacksonville FL as an Aviation Mechanic. Chase returned home in 2013 and went on to explore various career paths including, corrections, commercial and residential electrical work, concrete and construction, UTLX and  Mennel.  His heart was his son Aspen. Together they enjoyed time spent at the quarry and at the parks around town with his friends. Chase enjoyed fishing, camping, hunting, traveling and MMA. Service to others was very important to Chase. He had a great love for Haiti and it's people. Chase traveled to Haiti twice on mission trips to help in the building of 2 churches and ministering to the people. Chase was an organ donor and his final gift, was an answer to many prayers. He would be proud to know his final act was not death, but LIFE. A celebration of life will be held from 4-7 pm on Wednesday December 29, 2021 at the Knights of Columbus Hall 1232 E Center St. Marion, OH  43302 In lieu of flowers or gifts, please consider donating in Chase's name to www.liftkidshaiti.org Arrangements provided by Affordable Cremation and Funeral Services of Ohio -

The family of Chase Randy Miller created this Life Tributes page to make it easy to share your memories.

Send flowers to the Miller family.