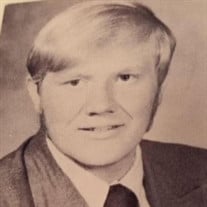 Carlton Bradley (Brad) Cook, age 67, of Marion, Ohio, passed away on Tuesday, March 16, 2021 after an extended illness. Brad was born on July 1, 1953, to Carlton and Betty Cook. Brad was a 1971 graduate of Ridgedale High School in Marion, Ohio where he played football. To his friends, Brad was better known as “Cookie”. He spent his career working as an Aircraft engineer. His career required him to travel throughout the United States working on military aircraft. Brad worked for Boeing and had the opportunity to work with NASA and the Department of Defense. In his leisure time, Brad enjoyed playing golf. Brad was a big Buckeye and Browns fan and loved watching them play. He also enjoyed spending time with his grandchildren and Facetiming his “Bestie”Bri. He lived vicariously through his grandchildren. He adored his children and would do anything for them. Brad was known to be a man of firm convictions and his willingness to stand for those convictions. He believed everyone had the right to express their beliefs without judgment. For those he loved, Brad was protective, loyal and generous. He was a man of deep faith, which at the end of his life helped him cope with his decline in health. Brad was preceded in death by his mother Betty Cook and his son Jamie Cook. He is survived by his father Carlton (Susan) Cook, brothers Bob (Debbie) Cook and Jeff (Jeanie) Cook, his sister Barb Cook, three of his children, Jon Cook, Amy Cook, and Amber (Ryan) Geiser. He is also survived by seven grandchildren Keenan Cook, Jordan Riebel, Ally Riebel, Briana Riebel, Collin Geiser, Addison Geiser, Emma Geiser and girlfriend Sandy Brown. A Celebration of Life for Brad will be held at Richland Road Church in Marion, Ohio Monday, March 22, 2021 from 5-8 pm. The family would love for all friends and family to come in Brad’s favorite sports teams attire, Buckeyes and Browns. Brad found comfort in the song, “If You Could See Me Now” by the group Truth and wanted to include these lyrics in has last words to his family and friends: Our Prayers have all been answered I finally arrived The healing that had been delayed Has now been realized No one's in a hurry There's no schedule to keep We're all enjoying Jesus Just sitting at His feet Chorus: If you could see me now I'm walking streets of gold If you could see me now I'm standing tall and whole If you could see me now You'd know I've seen His face If you could see me now You'd know the pain's erased You wouldn't want me to ever leave this place If you could only see me now My light and temporary trials Have worked out for my good To know it brought Him glory When I misunderstood Though we've had our sorrows They can never compare What Jesus has in store for us No language can share (Repeat Chorus X2) You wouldn't want me to ever leave this perfect place If you could only see me now If you could see me now If only you could see me now

Carlton Bradley (Brad) Cook, age 67, of Marion, Ohio, passed away on Tuesday, March 16, 2021 after an extended illness. Brad was born on July 1, 1953, to Carlton and Betty Cook. Brad was a 1971 graduate of Ridgedale High School in Marion, Ohio... View Obituary & Service Information

The family of Carlton Bradley Cook created this Life Tributes page to make it easy to share your memories.

Send flowers to the Cook family.