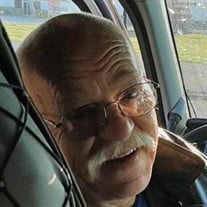 Bruce Lewis Wilson of Marion, Ohio died Monday, June 7, 2021. Bruce was born July 10, 1949, in Marion, Ohio. He was preceded in death by his mother, Ruby Hall, and father, Berle Wilson, and a brother, Clair Wilson. He is survived by brothers Mark (Tammy) Hall and Brad Hall, both of Marion; sisters Margaret (Ron) Starnes of Suffern, New York, Judy (Arthur) Barter of Georgetown, Kentucky, and Paula (Tom) Lowry of Marion. He is also survived by a son, Brian Eccleston of Omaha, Nebraska and granddaughter Isabella Eccleston, also of Omaha; along with a number of nephews and nieces. Bruce will also be missed by his furry, four-legged son, Wallace Wilson. Bruce was proud to have served in the United States Army as a combat veteran and excellent marksman in the Vietnam War, where he was a prisoner of war twice. He was honorably discharged in April of 1970 after three years of service. After his discharge, Bruce worked on offshore oil rigs in the Gulf of Mexico before becoming a truck driver in 1975. Bruce immensely enjoyed his life as a trucker. He and his son started the trucking authority BB Enterprises together in 2005. Bruce particularly enjoyed transporting loads to and from the west coast until his retirement in 2010. Bruce was an avid Cleveland Browns fan and proudly displayed Browns pennants, knickknacks, and memorabilia around his home. He loved riding his Harley-Davidson and Honda motorcycles and making fishing trips to Lake Erie. Unknown to many, Bruce loved gardening and had a green thumb. Bruce dearly loved his family and friends and willingly helped anyone when asked. He genuinely cared for others and had a high-spirited personality sure to elicit a smile or laugh from others. A celebration of life will be held for family and friends at 11 a.m. Tuesday, June 15 at Fish Cemetery, near the corner of Somerlot-Hoffman Road and State Route 4 South. Bruce’s brother-in-law, Major Arthur Barter, will oversee the celebration, which will include full military honors. Following the celebration, all are welcome to attend a gathering at The Salvation Army, 317 W. Church St., Marion. Memorial donations and contributions may be made to the Veterans Administration.

Bruce Lewis Wilson of Marion, Ohio died Monday, June 7, 2021. Bruce was born July 10, 1949, in Marion, Ohio. He was preceded in death by his mother, Ruby Hall, and father, Berle Wilson, and a brother, Clair Wilson. He is survived by brothers... View Obituary & Service Information

The family of Bruce L. Wilson created this Life Tributes page to make it easy to share your memories.

Send flowers to the Wilson family.