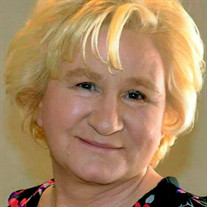 Betty Ann “Messer” Smith 64 of Marion received her Angel Wings December 6, 2018 at Marion General Hospital surrounded by family following a long battle with cancer. Betty was born February 16, 1954 in West Virginia to the late Everett and Jessy (Fuller) Spurlock. In addition to her parents, she was preceded in death by brothers Riley, Johnny, and William Spurlock; sisters Lou Bell Spurlock Chaffin, Catherine Spurlock, and Margaret Payne; as well as the father of her children Melvin “Papoose” Messer who are all loved and sadly missed. Before cancer took over her body, you could find Betty in the kitchen making homemade apple pies that her brothers would fight over. She also made biscuits and gravy that the grand kids couldn’t get enough of. Betty Ann is survived by her loving and generous husband Glenn Smith; children, Virginia (Robert) McWilliams, Mary Lou (Mark) Ferriman, and Patricia (Zach Mcgary) Messer; grandchildren, Codey Messer, Davidson Messer, Tryson Messer, Zaden “Merm” Mcgary; siblings Wilma Lee Perry, Flem Spurlock, Robert Spurlock, and David Spurlock, as well as numerous nieces and nephews.The special people in Betty’s life that she would want mentioned are Carol, Kathy, and Rose Spurlock, Aunt Pat “Nanner” and Brenda Miller Cameron. Funeral Services will be held on Wednesday at 2:00 pm in the Marion First Freewill Baptist Church, 1449 Crissinger Rd., Marion, with Rev. Jerry Copley officiating. The family will receive friends from 12:00 noon Wednesday until the time of the service. The family suggests memorials be in the form of contributions to the American Cancer Society and expressions of sympathy can be left at www.cremationservicesofohio.com

The family of Betty Ann "Messer" Smith created this Life Tributes page to make it easy to share your memories.

Send flowers to the Smith family.