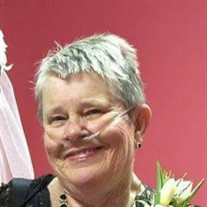 Anita (McKinley) Niday went to be with our Lord and Savior on Friday, April 22, 2022, after a long illness and stay at Marion General Hospital. She was 75 years old. Anita was born in Marion, Ohio, where she lived and worked all of her life. Anita was preceded in death by her parents, Donald and Helen McKinley, her two brothers, Robert Martin and Walter McKinley, her sister Mary (McKinley) Claypool, as well as two prior sons-in-law, Chris Lane and Todd Kelly. She leaves behind her devoted and loving husband of 55 years, Robert “Bob” Niday, and their two daughters, Lyn (Jason) Turner and Karen (Ted) Frericks. Her only beloved granddaughter and the joy of her life, Brennah Thomas, also survives. Anita will be dearly missed by her nieces, nephews, friends, and sweet kitty, Helga. Anita graduated from Marion Harding High School, where she played the French horn in the band and earned excellent grades. She worked as a secretary at Eaton Corporation shortly after graduating high school. Anita and Bob married in 1966, two years after meeting when Bob was visiting a friend’s family in Marion on leave from Rickenbacker Air Force Base, where he was stationed. Anita loved numbers (which neither her daughters nor granddaughter inherited). She went on to earn an Associate’s Degree in Accounting and Business, which she later used in the Accounting and Payroll Department at Marion Steel. Later, she worked in the Shipping Department as a clerk and eventually as a night manager. Imagine Anita climbing trucks loaded with rebar in her Carhartt gear in the dark! She was fearless, as you all know. Later, Anita went into transportation management with Marion Steel, and finished her career at Wyandot in Payroll and Human Resources. Anita was known for her love of sewing, having made multiple quilts and other projects for her family and friends over the span of her lifetime. Much of her time was spent in her sewing and fabric room. Anita was a member of Fair Park Baptist Church, where she helped instill the love of the Lord in her husband and children. She collected cardinals, loved red antique trucks, and was the most patriotic person around. One example of this is her Christmas tree covered in patriotic lights, ornaments, and flags that her children and husband enjoyed decorating with her each year. Anita and Bob could often be found drinking coffee on their flower-filled front porch visiting with friends and neighbors. She and Bob frequently traveled to St. Ignace, Michigan, to their favorite spot on the water near the Mackinac Bridge. They would browse the quaint shops, visit sand dunes, eat at their favorite restaurants, and drive to nearby towns in search of smoked fish, always taking time to pass through the Tunnel of Trees. The small place where they would stay, the Moran Bay Motel, had the perfect waterfront location with the best view on the island. The owner, Timmy, had their room ready and waiting upon their arrival. It truly was Anita and Bob’s home away from home. A graveside service for family and friends will be held at Chapel Heights Memory Gardens on Saturday, May 14, 2022 at 1:00 p.m. 2622 Marion-Upper Sandusky Rd. Marion, Ohio 43302. Part of Anita’s remains will be buried there, and the rest will be scattered in the Straits of Mackinac between the Upper and Lower Peninsulas of Michigan. Contributions can be made in Anita’s name to the Marion Area Humane Society. Psalms 23:1-‬6 The Lord is my shepherd; I shall not want. He makes me to lie down in green pastures; He leads me beside the still waters. He restores my soul; He leads me in the paths of righteousness For His name’s sake. Yea, though I walk through the valley of the shadow of death, I will fear no evil; For You are with me; Your rod and Your staff, they comfort me. You prepare a table before me in the presence of my enemies; You anoint my head with oil; My cup runs over. Surely goodness and mercy shall follow me All the days of my life; And I will dwell in the house of the Lord Forever.

Anita (McKinley) Niday went to be with our Lord and Savior on Friday, April 22, 2022, after a long illness and stay at Marion General Hospital. She was 75 years old. Anita was born in Marion, Ohio, where she lived and worked all of her life.... View Obituary & Service Information

The family of Anita S Niday created this Life Tributes page to make it easy to share your memories.

Anita (McKinley) Niday went to be with our Lord and Savior on...

Send flowers to the Niday family.